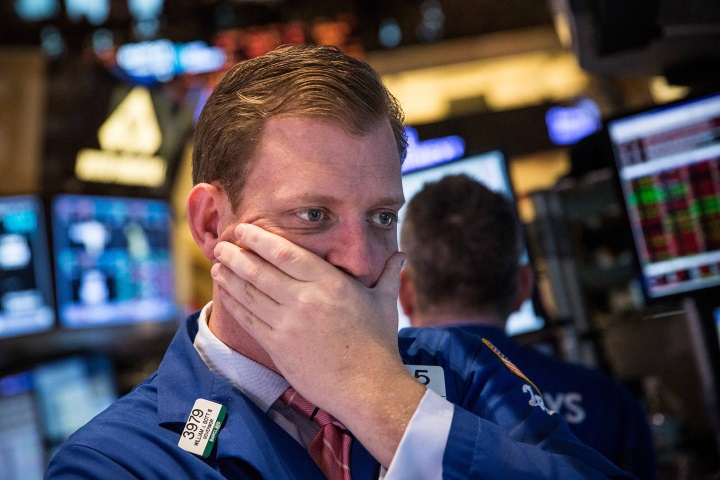 U.S. equity markets rallied higher in late trading yesterday and after a hard and steep fall in the prior two trading sessions. On Tuesday, the Dow jumped by 567 points, or 2.3%, for its biggest percentage gain in two years. The S&P 500 closed 1.7% higher on Tuesday, while the Nasdaq Composite gained 2.1 percent. But after strong gains yesterday the markets are showing signs of further weakness as the 3 major indexes are once again coming under pressure with Dow Futures down some 1% or 270 points.

With regards to market commentary, yesterday 50-year market veteran Art Cashin had the following to say about the markets dropping and possibly bottoming.

“Markets remain thin, and they remain volatile. And quite frankly, after doing this for 50 years, that’s just what you need for a bottoming process to succeed.’

On CNBC, Cashin said that investors should be patient and not get ahead of themselves as this thing sorts itself out. “Let the market tell you where it’s going by zigzagging back and forth and holding the previous levels.”

Yesterday, the news of the day centered on Credit Suisses’ VelocityShares Daily Inverse VIX Short-Term ETN. Credit Suisse says that the popular exchange-traded note that was designed to bet against rising volatility will be liquidated on Feb. 21 after the VelocityShares Daily Inverse VIX Short Term ETN lost more than 80% of its value in after-hours trade, triggering a technical liquidation, or “acceleration” event. “On the acceleration date, investors will receive a cash payment per ETN in an amount equal to the closing indicative value of XIV on the accelerated valuation date. The last day of trading for XIV is expected to be February 20, 2018. As of the date hereof, Credit Suisse will no longer issue new units of XIV ETNs,” the bank wrote in a statement.

Many investors and traders lost a great deal of money from this ETN and will not be able to recover from the losses due to the most recent volatility event as noted in a recent MarketWatch article.

“Nowhere was the pain more palpable than on Reddit’s “Trade XIV” group, which counts more than 1,800 members. One of them goes by the cyber-handle Lilkanna, and to say he’s had a rough stretch would be a huge understatement.

“I’ve lost $4 million, 3 years worth of work, and other people’s money,” he wrote in a post that’s garnering lots of attention. “Should I kill myself?”

The Cboe Volatility Index VIX was up 3.8% early Wednesday to 31.12 after spiking past the 50 mark in Tuesday’s historic session. Those moves followed the biggest one-day rise on record, a jump of 115% on Monday, which sent futures prices for the S&P 500 on a wild two-day ride.

Bloomberg ran a story on the concerning the recent volatility in the markets highlighting Finomgroup.com’s President Seth Golden: 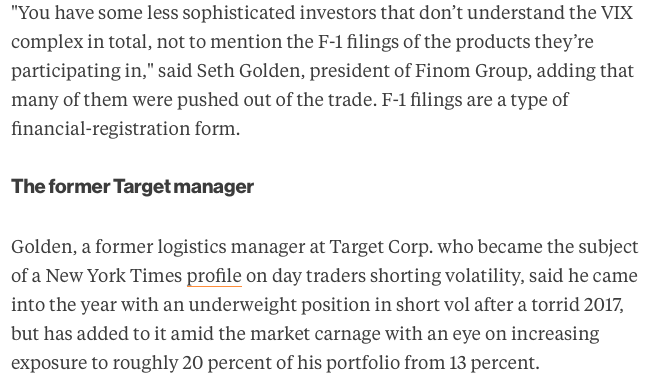 Snap Inc. beat quarterly earnings expectations for the first time in its brief public reporting existence. The stock jumped more than 23% in premarket trading on Wednesday to $17.36, above its initial public offering price of $17. Snapchat’s parent company reported an adjusted loss in the fourth quarter of 13 cents a share, 3 cents narrower than estimates, while revenue of $285.7 million beat forecasts of $253 million. The company also managed to beat its daily active user (DAU) consensus: DAUs rose 5% sequentially and 18% annually to 187 million, beating an average analyst estimate of 184 million.

The economic calendar remains very light today and through the remainder of the week. Volatility remains elevated as investors are whipsawed back and forth in the markets. Until the markets find stability and accept the probability of higher interests rates, the remainder of the trading week is uncertain, at best. With that said, the underlying fundamentals of the economy also remain strong and support higher corporate earnings growth through much of 2018. At some point, when the major indexes do stabilize they will likely trend higher on the whole of 2018 and as they follow the strength in corporate earnings and despite higher bond yields. Even with a 3% 10-year Treasury note, investors are still able to extrapolate a greater return, long-term from equity markets.