It’s Never Utopia, But It Gets Better And It Will 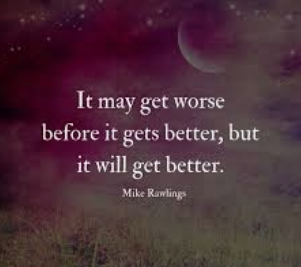 For those who have never experienced a bear market before, welcome to the worst of times! Know that for every bear market there is only the probability of a positive outcome, the inevitable resumption of a bull market. This is an elaborate way of exploring the idea that “it always gets better”. From time-to-time, conditions worsen in the market, but they ultimately resolve to the upside. This is what we preached in our late February-March reports, and this is what was produced in the markets! We never get a perfect-utopian market; that’s not the way the markets work, let alone life. In the same way we shouldn’t give up on life when times are tough, we shouldn’t find ourselves turning our backs on markets, as better times will come… and some of us know a thing or two about tough times turning anew better times. Don’t know that smile? Maybe you should get to know the man carrying that smile as well as his struggles in life that ultimately were met with great fortune and successes. During the early 1980s, Chris Gardner struggled with homelessness while raising a toddler son. He became a stock broker and eventually founded his own brokerage firm Gardner Rich & Co in 1987. In 2006, Gardner sold his minority stake in the firm and published a memoir. That book was made into the motion picture The Pursuit of Happyness starring Will Smith. It’s a real life, true story about a single, homeless, unemployed father who turned the worst of times into the best that life had to offer. If he can do and accomplish what he did from living in a public bathroom facility some nights… things can always get better. Last week Cullen Roche, of Discipline Funds, penned an article titled “Hope Is A Great Strategy“. Forgive the “cut and paste”, but I thought it a great personal story by Cullen that should be shared. I think he’ll be ok with it. Please read his story below:

“Hope is an optimistic state of mind that is based on an expectation of positive outcomes with respect to events and circumstances in one’s life or the world at large.”

Five years ago I pulled over on the I-5 freeway sobbing. I couldn’t drive. I had been on my way home from a fertility clinic where I’d just learned that it was going to be hard for us to have children. But I still had hope. And so I called the doctor and asked for a more specific answer:

BOOM. 95% odds of failure was like a bomb going off in my heart. This was the moment where I started to lose hope. I’m not a crier. I’m one of those guys who holds in his emotions even when I know I should let them pour out. I don’t know why I’m like that, but this was too much for me. I come from a family of 10. Being a dad was part of my destiny in my mind. It was part of my DNA. Going through the emotions of not having that future was like letting a future version of myself die. I won’t go into the gory details of the many years before and after that because this isn’t a sad story. It’s a happy story. But I will relive and share the thing that got me through all those bad times – HOPE. Viktor Frankl famously said that no one can force you to feel a certain way. The environment you experience and the future you live is what you make of it. Now, I won’t compare my life to the Nazi concentration camp he experienced because that would be ridiculous, but his words were a constant reminder to me that the obstacles we confront can be encountered with optimism or pessimism. We can view them as things to overcome or things that will overcome us. It took me a long time to embrace that, but I always tried my best to encounter the next few years with a hopeful and pragmatic optimism. I was going to be a happy, hopeful, good person regardless of the bad outcomes. Yesterday I welcomed my second daughter into the world. She’s a miracle. And she’s perfect. They both are. I can’t wait to help them grow into beautiful, thoughtful, kind and hopeful people. Stay hopeful my friends! NB – There’s a saying on Wall Street that “hope isn’t a strategy”. I disagree.
Thank you Cullen! Pretty powerful story of what I like to refer to as the bad turning good and things always get better if you remain hopeful, optimistic. I believe hope is a noun, it is something an individual has, beholds. In my own life (Seth Golden), my mother was a heroine addict, with my earliest childhood memory being forced to hold a belt around her arm so that she could push a syringe of heroine into a vein. This went on until I was 7 years old, chased daily, slashed with knives, pen or beaten with a belt or shoe until I submitted and helped her shoot up. (sorry, sobbing as I type)… My brother was too young at 3 years my junior and my sister just an infant, so it was my burden to bear. Coming home from school one day, with my brother in tow, we entered the house to see she had gone; she took most of her clothes with her. I did most of the cooking and cleaning usually, so her not being there… but I called my Father to let him know Mommy was gone. Not the worst of days, but the worst was yet to come… A few months later my father was incarcerated for tax evasion, and my brother and I were placed in a children’s facility (orphanage). My brother didn’t speak at nearly 4 years old, but you can imagine why. The caretakers made fun of him, made him strip nude as punishment and our make shift rooms were adjacent, whereby his nightly cries were too much for me to endure. We escaped in the middle of the night, pajamas and all, and spent the next several weeks sleeping under the construction overpasses that became Interstate 595 in South Florida (Greater Ft. Lauderdale). Stole produce from Publix to feed ourselves, fought off homeless pedophiles and psychotics that congregated in these areas, but you do what you gotta do. Eventually I found a landmark that I recalled that led us to our home, sliders were still unlocked in the back of the house. So my little brother and I went inside. Electric, water were still working. We went to school the next day, didn’t really know what else to do. My Father eventually came back home, reclaimed our sister from another children’s facility, and life went on. My Father had missed my 8th birthday that year, but I remember the second day he was home he gave me this comic book with a letter. It read the same way as my recanting of those years, with the admission of tears and sorrow for what he had done and didn’t do to protect us. To this day, I’ve never taken the comic book out of its plastic sleeve, I’ve never read it and more than likely I never will. Why? Some things just need to be left as they were, remembered by the past scarring, but also understood they lead to better times. (Series 1, 1985) As the years passed, from the worst of times it got better, and eventually it got good. It always gets better and it often does get good. Utopia, well… without adversity, how would we even recognize utopia? During the early 1980s, Gardner struggled with homelessness while raising a toddler son. During the 1980s, I struggled with homelessness, an abusive orphanage, raising my little brother/sister, sleeping and impulsivity disorders, while my Father built a business to support us financially… but it got better and eventually it got good. As Chris Gardner says, “Far too often people use “excuses” for their shortcomings“. I’ve got a lot of excuses folks, a lot of excuses, but I never let them determine my outcomes. Any success I’ve achieved, as measured through my family’s success since those tough times, I attribute to never giving up and believing it gets better. A song sometimes reminds me of the strength, within us all, to overcome. Hall of Fame by The Script… “You can be the greatest, yea you can be the best, you can be like King Kong banging on his chest!” I turned 45 years old in October 2021. I’ve stolen food, been homeless, attacked on the streets and mentally scarred beyond my ability to dismiss some 38 years later. I’ve physically beaten child psychologists two times over, expelled from a Catholic school, hospitalized a high school classmate during a violent outburst, and rendered a police officer unconscious in a dispute over a gas pump at a gas station when I was 24 years old… my breaking point and before I found God. I’m no more proud of the things I’ve done to others than the things that were done to me as a child… time, but with time! Since I was forgiven and found the ability to forgive that which my mother did to me and our family, it got better… I got better… and maybe even good! It still hurts and why, I think because it is supposed to, supposed to remind of my cross to bear and that bad times can and will produce good times if we remain with a positive outlook, strive to make that outlook a reality. Get busy living and loving; just get busy! Excuses don’t excuse the reality, they excuse the ability to take the wrong and make it right, to take the bad and create the good. So get busy! Don’t do it, don’t let tough times in the market, of all things, detract from the good times to come! If such true life stories don’t impact the way intended to do so, well then, that’s why we have statistical data and probabilities! 😉 Have a great trading week, and know that it gets good… with time!
Share this
8 likes
Related Articles
3 Comments