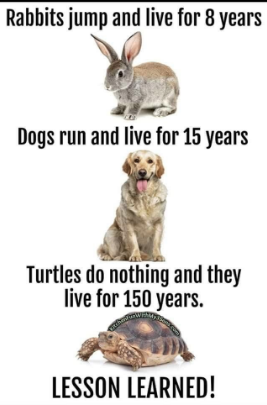 Are you trying to make quick returns and trading yourself out of the market, quickly… Or are you refining your long-term process for steady repeatable annual profits? Are you utilizing time/duration as your key asset for long-term success?

All good questions, that many have not been focused on since the March 2020 bottom and since the S&P 500 hasn’t had any protracted drawdowns, drawdowns that occur over months, not days or even weeks like the current cyclical bull market. Yes, the market has had typical drawdowns since March 2020, but the rebounds from those pullbacks have been extremely swift and proven inconsequential to the bulls, which include many newer investors/traders who have never lived through cyclical bear markets. The big picture perspective of how markets work under more normal conditions and without substantial fiscal and monetary supports may elude many investors/traders. So while the “fast money” has been made at the index level, and continues to be made, I would encourage investors/traders to understand that mean reversion or normalization is another fundamental truism of markets. The best way to prepare for such normalization is to know its inevitable and adjust to change when it arrives.

The majority of stocks have already been correcting, and many remain in corrective phases, even bear market territory. The chart above shows the percentage of stocks in the S&P 500 that are down 10%, 20%, and 30% from their 52-week highs. As we can see (off to the right, in black shaded), 43% of the S&P 500 are currently in “correction territory”, 10% below their 52-week highs. While many investors are waiting for a “correction” at the index level, you might be waiting for some time unless a more uniform attack on the mega-cap names is found.

Sometimes hard work, works! I want to recognize many Finom Group members for their willingness to engage the vast array of informational studies and analysis we perform week-in and week-out, and to use those studies alongside their active game planning and executions. Recall from last week’s Research Report what we offered heading into the weakest trading week of September (which was this past week):

“For all instances of 2 week selloffs heading into the “Weakest Week” (next week), market returns for the Weakest Week were not positive, not positive at all.

Only 1 time since 1960 has the market been positive for the Weakest Week with a 2-week losing streak going into the Weakest Week; 1989. That’s a lot of red on the screen, a rather substantial average loss during the Weakest Week (next week), and an extremely low % positivity rate. The study was performed by Quantifiable Edges and should be considered by all investors/traders alike. Having appropriate market expectations is just one of the better ways to maintain one’s Emotional Quotient. If the market declines further next week, based on this data point/study, that’s simply normal and to-be-expected. When the market is validating human behavior according to history, it is more easily engaged with one’s game plan. But, but, but… and boy do I got big ole butttttt!!!

Notice anything friggin beautiful about my but? It’s one “t” there, so don’t get bent out of shape folks

! The chart above is of the 1989 YTD performance up to the 3rd Friday of September, and going into the Weakest Week of September. What’s the gain YTD for 1989 on 9/15/1989 (Friday, 24.25%)? Strength begets strength right? That’s one heck of a long-term uptrend is it not? How’s that 50-DMA doing with respect to providing the S&P 500 with support rather constantly along the duration of the uptrend? Now, compare with 2021…

I looked at ALL THE CHARTS for the dates outlined in the Quantifiable Edges study. Only 1 of the dates had a double-digit return through the 3rd Friday of September of the calendar year; 1989. The average gain of the S&P 500 in the years outlined was 5.6%, ex-1989. Indeed, 1989 is the only year similar to that of 2021 when it comes to YTD gains through the 3rd Friday of September and heading into the Weakest Week. For Seth, this is taking the provided data/study to the next level, what we try to do at Finom Group. I’m not saying 2021 will find a positive return for the S&P 500 next week, simply no way to guarantee that, even with the likeness to 1989. I’m simply outlining WHY investors should remain flexible and open-minded to a wide variety of outcomes. Naturally, I will be leaning into any market weakness, acting locally on price weakness with a long-term bullish bias…”

Simply put, we are of the opinion the labor market has been aiding in maintaining some degree of elevated inflation levels, while also exacerbating supply issues. As more and more people head back to work, fewer goods will be purchased on the fringe, given less time/trips to stores and while more service spending should be engaged. This will help alleviate some of the goods-supply issues over time. We are still monitoring the progress of this economic issue of the day, but note that September’s Nonfarm Payroll data may not prove a robust rebound for labor and employment in the meantime. 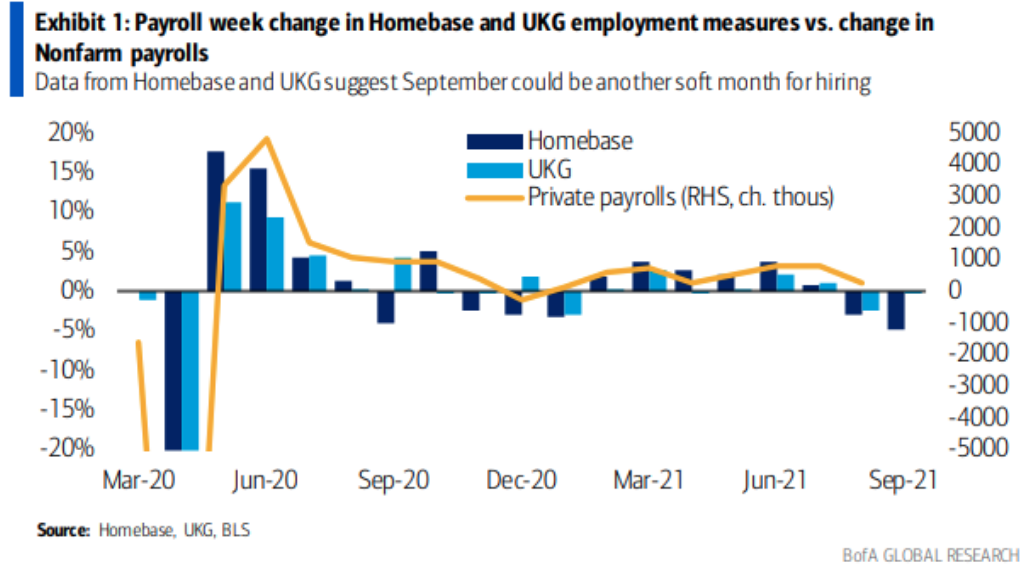 A number of factors that have created headwinds for the workforce return in 2021 were still in place during September, while Mother Nature also held back new job creation in September via Hurricane Ida. High frequency data from Homebase and UKG (Ultimate Kronos Group) suggest that the September jobs report may again be on the softer side, as shown above.

The economic impact of Hurricane Ida was evident in the most recent initial jobless claims data. There were noticeable increases in first-time claims, as one would expect, in New York, Pennsylvania, Connecticut, Louisiana and Alabama, according to government data released on Thursday. Given that the impact of the storm unfolded over the better part of a week, we think it will be early October before we get a sense of the true underlying trend in claims.

With now 2 weeks of consecutive increases, this may also be one of the reasons we’ve yet to see a meaningful bounce in consumer sentiment/confidence from the August lows (University of Michigan Consumer Sentiment Survey) The following chart offers how correlated jobless claims and consumer sentiment track. 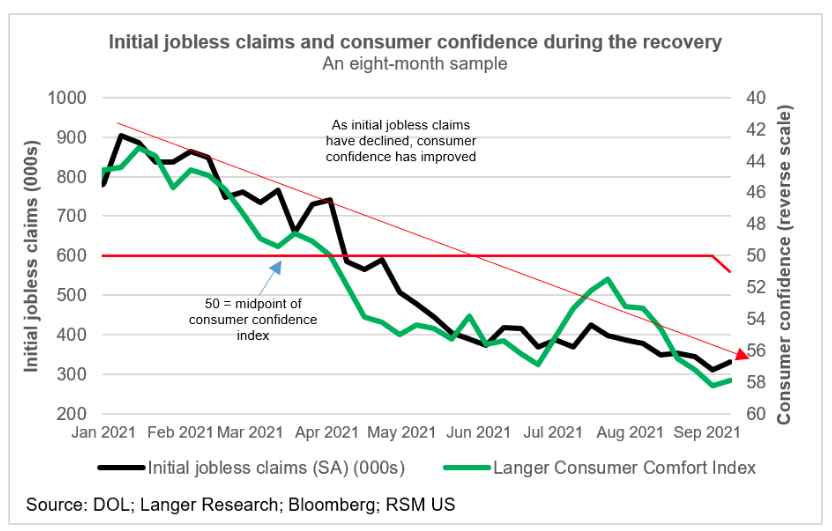 The Conference Board Leading Economic Index (LEI) for the U.S. increased sharply in August, fueled by positive contributions from all components except for consumer expectations for business conditions and average weekly manufacturing hours. In the six-month period ending August 2021, the leading economic index increased 6.4% (about a 13.1% annual rate), up sharply from 3.4% (about a 6.9% annual rate) over the previous six months. In addition, the strengths among the leading indicators remained widespread. 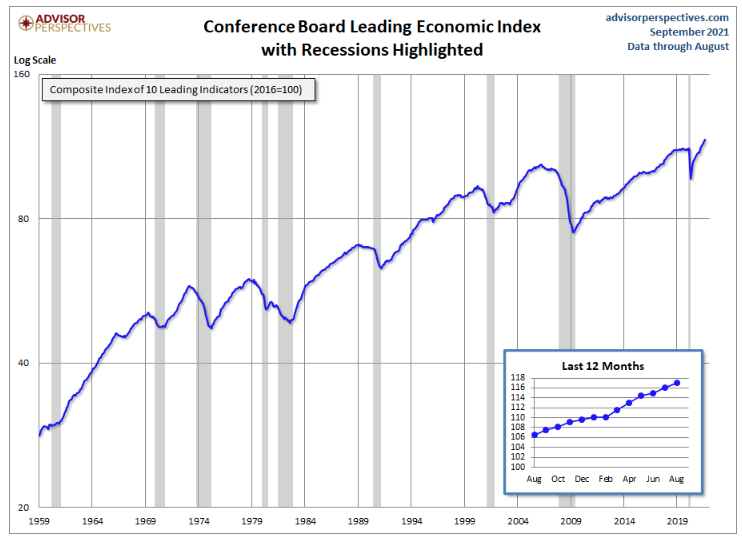 Now, also recall that the Leading Economic Indicators (LEI) remain at extremely strong levels, which tends to precede strong earnings and S&P 500 returns. Recall this study from FundStrat, concerning forward S&P 500 returns when LEI levels are as strong as they are today (9.9% YoY): 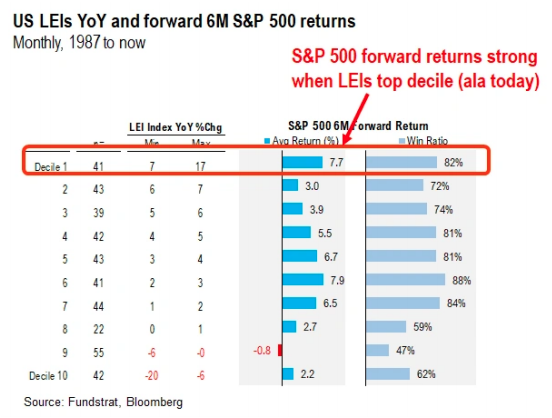 Global economic growth is expected to be 6% for 2021 and 4.9% for 2022, according to the International Monetary Fund (IMF). If realized, this would be the fastest growth in at least a generation, or probably closer to two or three. Not since 1973 has growth been 6% or higher.

To better understand the overall interim directional trend, it may prove better to take a broad market approach by way of the NYSE % of stocks above their 200-DMA relative to the % of stocks above their 50-DMA. Remember, if the chart shows the trend line moving higher, the interim trend is weakening, and when the trend line is moving lower, the interim trend is strengthening.

Based on the breadth indicator chart above, indeed, the interim trend strengthened on the week, going from 1.70 down to 1.25 to finish the week. Nonetheless, Friday did find some folks either taking profits or reducing exposure altogether, given the slight rise in the breadth indicator on Friday. We can’t make too much of this Friday’s action, and should probably lean into the absolute level identifying a stronger interim trend for the week was accomplished. Cautiously optimistic!

Let’s consider the big picture for a moment and reassert that this is a SECULAR BULL MARKET, which likely started in April 2013, the day that the S&P 500 cleared its double top from 2000 and 2007.

Now, look at the sector ETF gains since: