“Assuming, assuming one could be that best market timer in the world, the difference between that amount of work and simply buying the index ETF and holding it through ups and downs is a meager 1 percent. That’s it, that’s all one achieves above the Buy and Hold strategy. In other words, while it proves emotionally taxing to accept that drawdowns are the price one pays for long-term profits, it’s still the better approach to investing.” 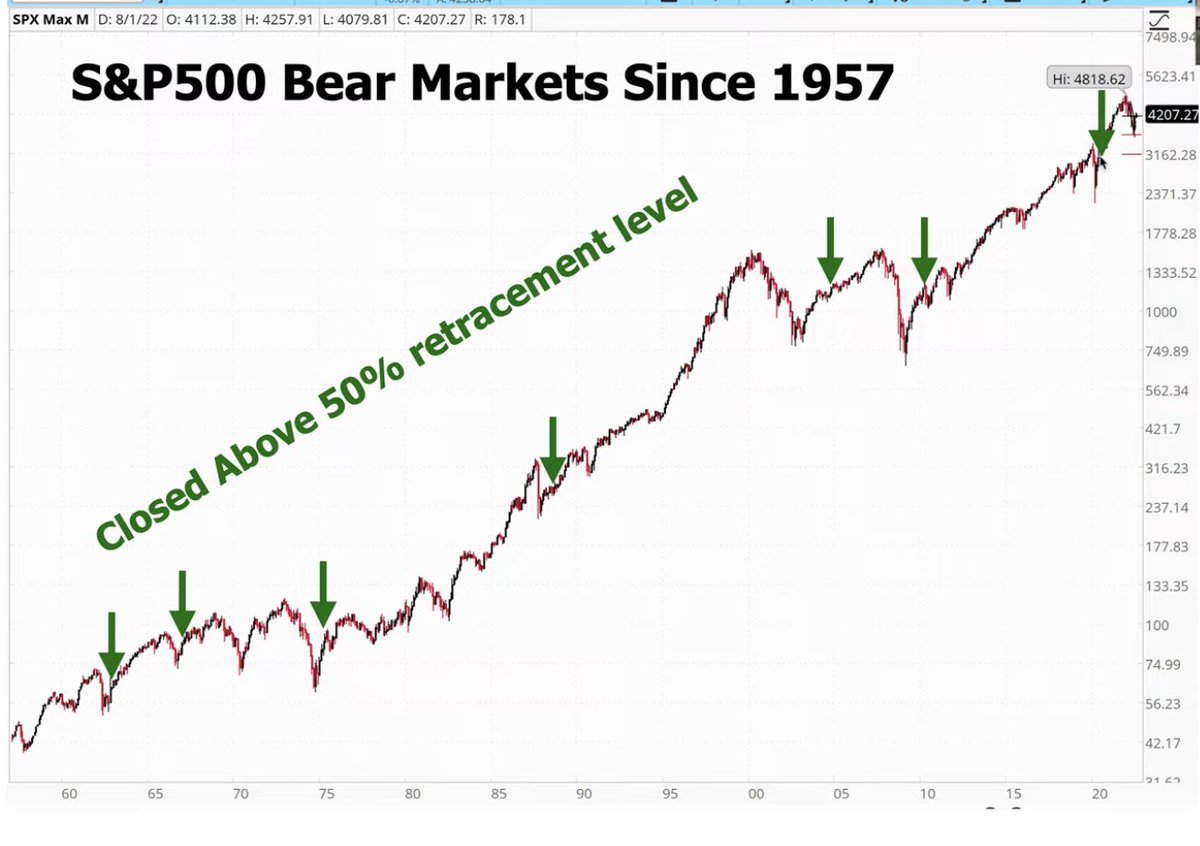 I can’t speak for all market particpants, but what I would offer is that if the same low price is revisited after a 50% or greater bounce fails, a retest has occurred. As such, we know that based on this unique occurrence, we now have 2 historical studies that have deviated from their historical performance trend. Again, we assess and profess that such occurrences validate a breakdown, which may prove a byproduct of the Fed’s monetary policy path.

Bank of America’s (BofA) widely watched global fund manager survey showed broad bearishness in September. The latest reading indicated the majority of respondents are underweight equities for the first time on record. Now, records start in 2002, so it isn’t an especially long history, but it does include 2007 – 2009’s bear market (typically a prolonged and fundamentally driven decline exceeding -20%) and early-2020’s brief downturn for comparison. Similarly, 62% of managers are overweight cash—a reading that has never been above 60% in two decades. 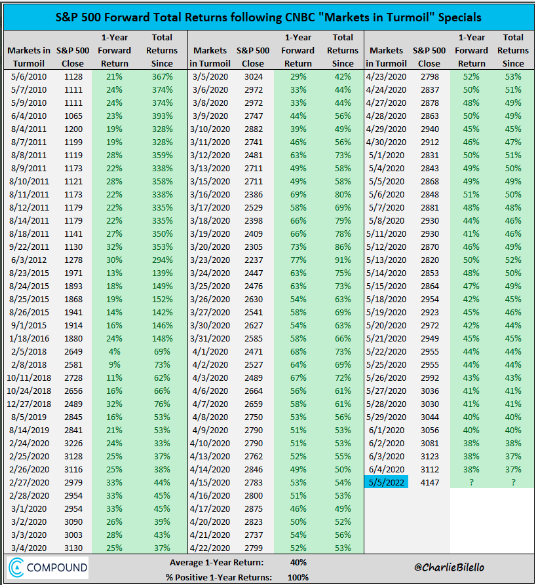 Sentiment data can prove rather in-actionable and impractical for investors. In other words, it generally has less utility in the interim, but greater price predictive qualities long-term Consider the CNBC Markets In Turmoil special programs that tend to air when… well, when markets are in turmoil. Historically, a year after such a CNBC special, the S&P 500 has always been positive. The average return is a remarkable 40% also. The S&P 500 closed at 4,147 on May 5, 2022, the first such Markets In Turmoil program of 2022. Mark your calendar folks!

Unlike the S&P 500, the Nasdaq Composite and the NYSE did close just below their 200-weekly moving average this past week. The NYSE has actually done this a few more times than its peer indices. Nonetheless, this is why investors should still be planning for additional downside, but utilize oversold bounces to take profits on buy-the-dip trades.

The table below from Oppenhiemer’s Ari Wald serves as a market bottom checklist. Again, these are bottoming conditions, but it doesn’t suggest the market bottoms and only goes higher from here. 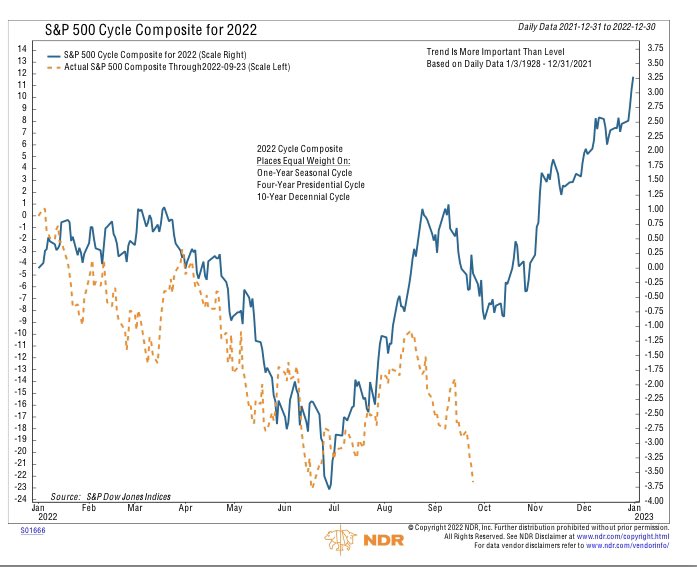 And while many other historical studies have broken down over the last month or so, the NDR Cycle Composite is still very much intact for 2022. Again, the updated tracking for 2022 is almost perfectly aligned with the Cycle Composite. The 2022 (yellow trend line) is tracking perfectly to the Cycle Composite (blue trend line). If the pattern holds, it suggests a potential short squeeze into year-end is a reasonable outlook, but with the next couple of weeks (including the first week of October) proving trecherious.

“With all of that being said, let me offer my perspective on the latest message from Jackson Hole and the FOMC in the following points”: As we can see in the chart above, the S&P 500 typically bottoms 4 months (X-axis) ahead of the recession end date also (vertical line in red). By waiting until the recession has been declared over, the average investor is missing out on a roughly 25% rebound in price from the lows, which defines the OPPORTUNITY COST. The most common push back favoring “waiting for clarity” and/or stronger economy is fear of a steeper market decline, and therefore steeper portfolio drawdowns. Keep in mind that “waiting for anything” is code for “market timing”.  So let’s think about waiting for and/or market timing more logically: “I’m gaining a lesser drawdown.” Talk about your condradictions in both terminology and rationale. I think that just about summarizes the logic

many force themselves to believe by trying to time the market while increasing their opportunity cost/s. “I’m gaining a lesser drawdown.”  You can’t save everyone, row your own boat folks!