With A Tightening Cycle, High Valuations No More: Weekly Nifty 9 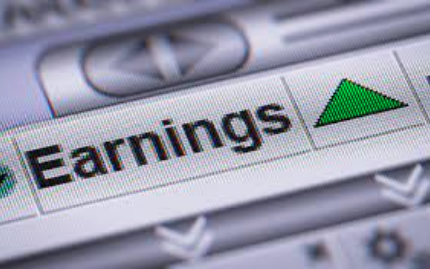 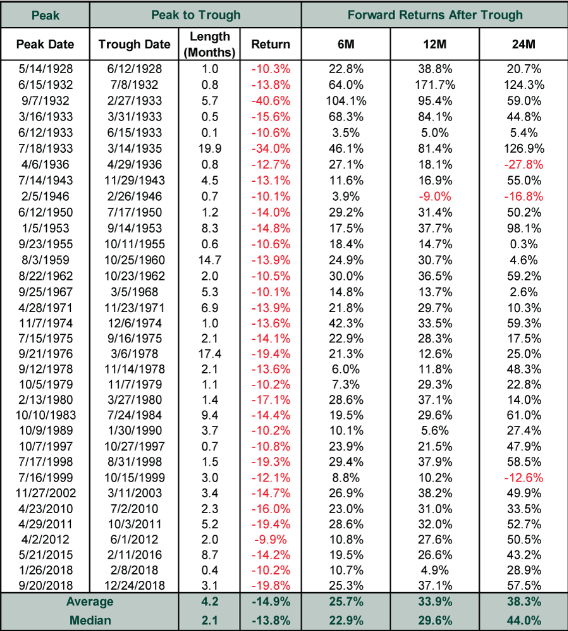 What the table of S&P 500 corrections above depicts is that corrections are frequent, they are not anomalies. Additionally, 6 months later there was only 1 negative return from 1946. Twelve months later, markets are almost always higher after corrections as well. At this point, it is just a matter of enduring the correction, monitoring price action for a potential bottom, or something that turns into a bear market. Having said that, it’s difficult for the S&P 500 to produce a bear market, when earnings are still growing and the economy is still expanding with near record-low unemployment and 11 million+ job openings. Yes, inflation, Fed tightening and China lockdowns are always a concern until proven otherwise, but we view these as bricks in the wall of worry until corporate earnings decisively turn lower, which they have not to-date.

In order to decipher if maybe, just maybe the bottom of the downtrend is being achieved, we subtract the New Highs from the New Lows to see if the relative performance is found improving. The following 2 charts for the NYSE and Nasdaq performs this technical analysis using the NYSE New Highs minus New Lows and Nasdaq New Highs minus New Lows. We are using these 2 indices because they are the broadest, they have the largest amount of stocks.

As the 2 charts show, the trend lines for New Highs minus New Lows has improved, albeit still in negative territory for both the NYSE and Nasdaq, which indicates there are still more New Lows than New Highs daily. There have been minor improvements or slowing in the past week, but nothing that found more New Highs than New Lows for any trading day.

Recall last week that the Equity Put/Call Ratio finished at its highest level since March 2020.

Despite the fact that the S&P 500 made a new closing low for the year, the VIX did not make a new closing high for the year, nor did the Equity Put/Call ratio. This is interesting and may be the early signs of another potential bounce, absent exogenous macro-force factors. 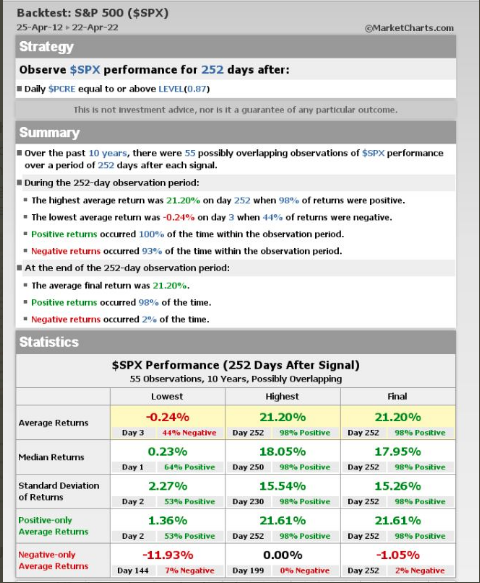 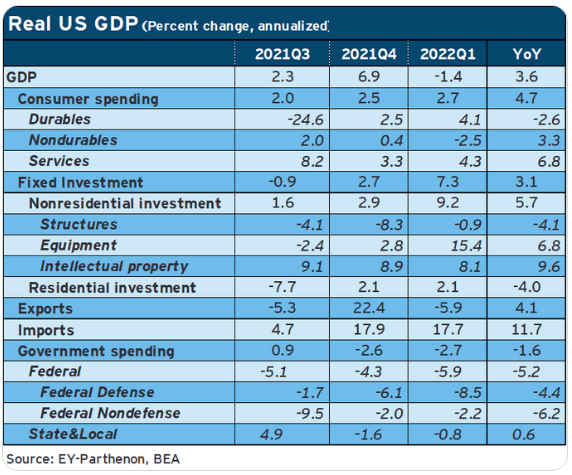 Consumer spending is the main driver of U.S. GDP and a key determinant within deciphering between expansionary and recessionary conditions. Not only was consumer spending strong in the Q1 2022 period, it has accelerated since Q3 2021. For those insisting on a weakening consumer, there has been no, and remain no signs of consumer weakening. This does not mean consumer spending can’t weaken, but like all manners of market technical analysis, we follow the trends.

The chart and table below illustrate the performance of the generic Big Four with an overlay of a simple average of the four since the end of the most recent recession (2020). The data points show the cumulative percent change from a zero starting point for April 2020. 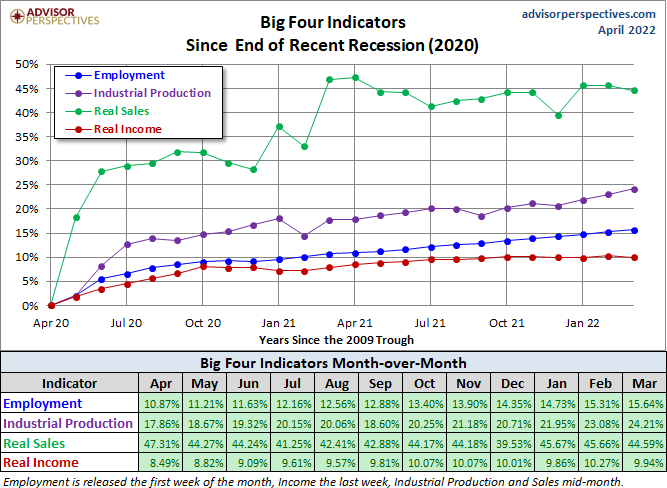 Based on the Big Four Indicators the economic situation, and despite all the naysayers and financial media punditry, appears to be on very solid footing.

Excluding Amazon, the S&P 500 would be reporting double-digit earnings growth for Q1 2022. 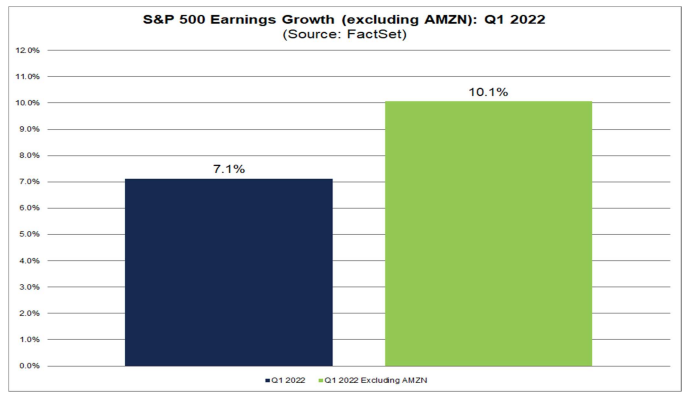 Amazon.com is the largest detractor to earnings growth for the S&P 500 for the first quarter due to the unusually large negative earnings surprise reported by the company. On April 28, Amazon.com reported (GAAP) EPS of -$7.56 for Q1 2022, compared to the mean EPS estimate of $8.35. It should be noted that the GAAP EPS number for Amazon.com included a pre-tax (valuation) loss of $7.6 billion. The majority of analysts provide estimates for Amazon.com on a GAAP basis. If this company were excluded, the blended earnings growth for the S&P 500 would improve to 10.1% from 7.1%. Amazon.com is an example of a company that faced a difficult year-over-year comparison and macroeconomic headwinds. In Q1 2021, Amazon.com reported EPS of $15.79, which is the second-highest EPS number reported by the company. Regarding macroeconomic headwinds, the company stated in its press release, ”The pandemic and subsequent war in Ukraine have brought unusual growth and challenges…our teams are squarely focused on improving productivity and cost efficiencies throughout our fulfillment network. We know how to do this and have done it before. This make take some time, particularly as we work through ongoing inflationary and supply chain pressures…” 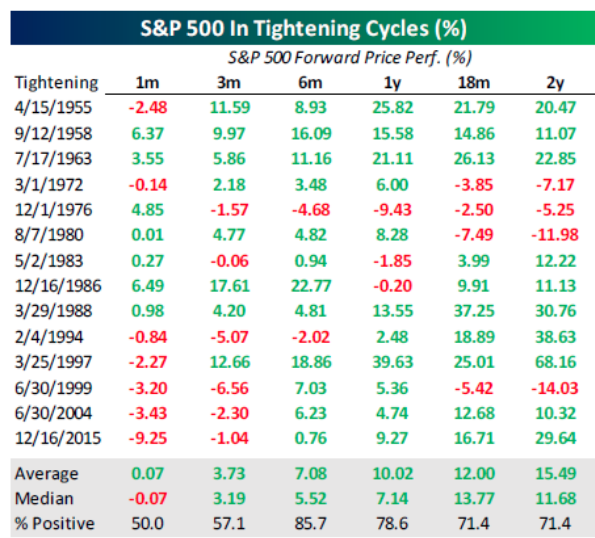 With this table we can infer the question as to why the 6-month return column has such a strong positivity rate at 85.7 percent. I think the answer would suggest that, indeed, time is your friend. Within the context of a rate hike cycle, investors adjust to the Equity Risk Premium, analyze the impact on the economy and earnings post the rate hike implementations. Where there is less impact than feared, there are fierce rallies to be found. The 6-month mark seems a decent amount of time to evaluate the path and impact of rate hikes. 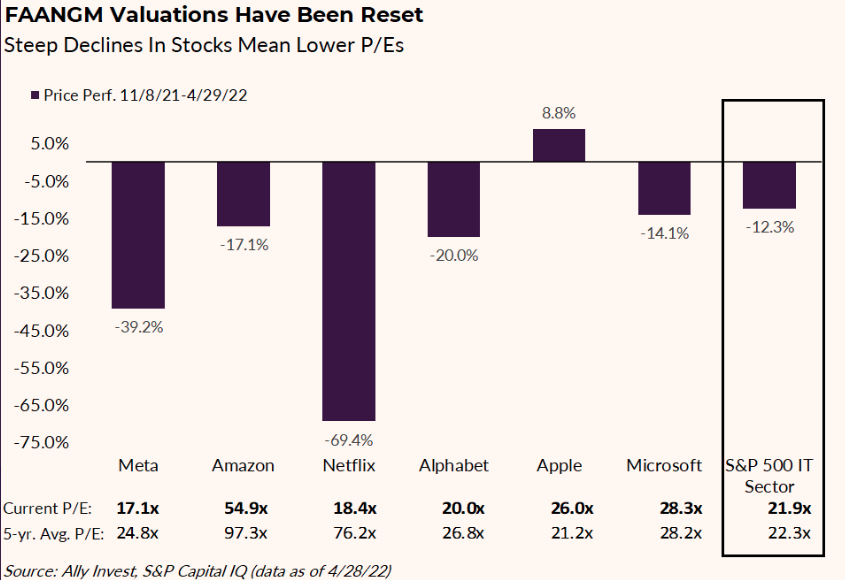 For the FAANGM stocks (that’s Facebook, Apple, Amazon, Netflix, Google and Microsoft), valuations have also been reduced. On average, the P/Es for this group are 25% lower than their 5-year average. It has been rare to find these stocks at this type of discount in the past.