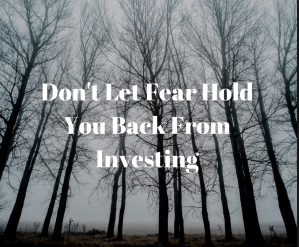 The bigger they are, the harder they fall…and they don’t get any bigger than the U.S. equity markets. After falling by roughly .5% on Monday, the Dow Jones Industrial Average (DJIA) and S&P 500 (SPX) are set for an even greater reset with futures pointing to a greater than 1.25% drop at the onset of trading on Wall Street. While the media will point its finger at rising geopolitical tensions for the growing sell-off in the U.S., these factors have largely persisted since the spring. As such, and while we don’t discount the geopolitical headwind, we more appropriately recognize the markets failure to find technical support as various sectors continue their declines. One of these major market sectors is the financials otherwise more greatly represented by the XLF. In a tweet on Monday, Finom Group’s chief market strategist, Seth Golden, offered the following:

The financial sector is among the most influential sectors within the S&P 500 and while it hasn’t proven the undoing of the market for much of the year, without the support of the tech sector, the financials have the ability to take down the S&P 500. What don’t we have or haven’t we had in the way of market support over the last 30 days or so, that’s right, tech sector support. Given the aforementioned, the S&P 500 is falling sharply on Tuesday morning and since closing below its 200-DMA as shown in the chart below.

We could easily pile onto these main concerns being expressed by investors, but these are seemingly carrying the most weight presently and carrying with them the greatest fears. With regards to the Federal Reserve and the China/U.S. trade war, here is some commentary from CNBC’s Jim Cramer:

“Housing’s being crushed by an overzealous Federal Reserve and China’s getting slammed by the president’s trade war.

If trade talks abruptly end, a distinct possibility considering both countries’ increasingly tense exchanges, “we better get used to some serious collateral damage” to the stock market.

I think the president wants the economic equivalent of regime change,” Cramer said. “Yep, not an economic war, but a cold war, with the Chinese once again playing the pre-Nixon role of worldwide nemesis. Needless to say, that is not what Wall Street wants to see.”

As Finom Group had been outlining for the last couple of weeks, we fully expect a retest of the recent lows if not a fresh low before finding a bottom in the market. Last Tuesday’s 500+ point rally in the Dow is proving to be little more than your typical dead-cat bounce, even though volatility hasn’t proven a greater danger than what was seen during the February correction. In other words, this particular market sell-off is occurring in a more orderly fashion and with many investors already having head for cover. Along these lines of consideration and with the S&P teetering on the verge of going negative YTD, Morgan Stanley’s Michael Wilson characterizes recent market activity.

“We don’t think the correction is done yet. We think attempts to rebound were more short lived than sustainable. Recent price declines in crowded growth, tech, and discretionary have caused enough portfolio pain that we think most investors are playing with weak hands. Given the high degree of cyclicality in both tech and consumer discretionary, we think their derating should be more in line with the broader S&P 500, or another 6-8%.”

Growth names, in particular FANG stocks, have come under increasing pressure as the market’s focus shifted toward value stocks, which fail to support the broader market. (See chart below) The tech sector, as mentioned earlier and which had outperformed other industries this year, is also in retreat.

“While the S&P 500 index is just minus 5.5% off the Sept. 20 high, the average S&P 500 stocks is off minus 17% from its 52-week high, thus much selling on the stock level has already taken place,” he wrote in a note. “The fact that the S&P managed to close higher on just 5 of the last 21 trading days, a very rare streak, shows just how much selling has already occurred.” 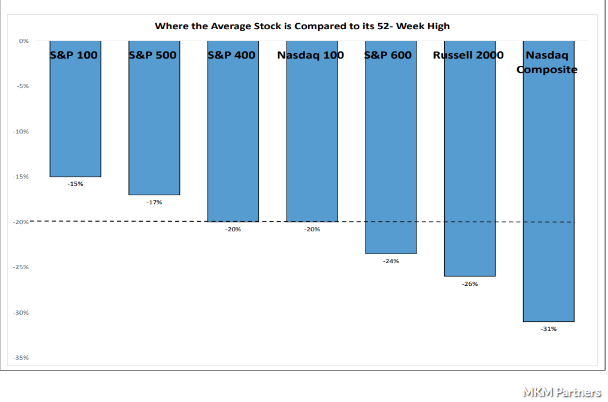 “A close above 2,825 will nullify the bear case,” he said. “If this pattern indeed plays out for the bears, 2,600 is the downside objective. Often, capitulation lows are retested. The longer the market trades under 2,825 the more likely it is to retest 2,710.”

The market is undergoing a sentiment reset as equities come under pressure, even those equities which have reported strong Q3 2018 earnings. Although the market selling pressure has been heavy and without a massive surge in the VIX, this is a good sign that the markets are simply experiencing a natural corrective phase in a broader bull market cycle. We haven’t even experienced extreme short-term fear in the market as of yet. Another signal that this should prove a normal corrective period for the market can be viewed through consumer confidence, which hasn’t failed and with the market under pressure. 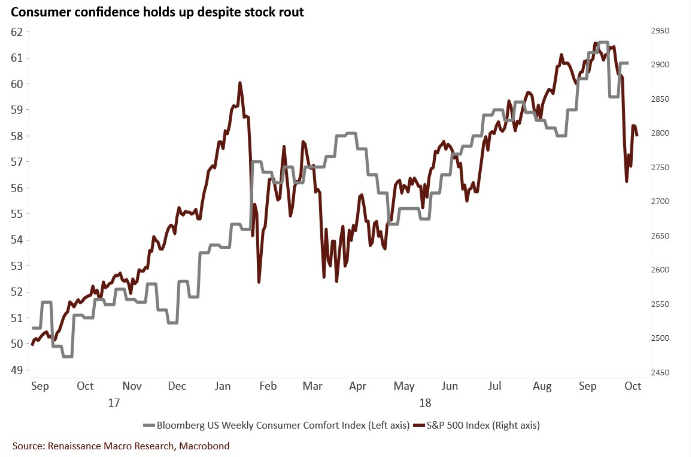 There are two themes we can extrapolate from the chart above. The first is that GDP growth should remain strong despite the overall equity market performance at-hand. The second theme is that consumer spending should be strong this holiday shopping season. No matter which way you slice it, the consumer is in far better shape than during previous bear markets occurrences as they have greatly deleveraged from the Great Financial Crisis. It’s the consumer that gives us confidence in the economy and an eventual equity market rebound.

A strong economy underpins the equity markets, but it can also be the stimulus for a market correction. Why? The Fed likes to hike rates into a strengthening economy in order to keep the economy from overheating. Given the elongated period of the Fed’s easing policy and the subsequent accommodative policy, the more recent Fed tightening of monetary policy causes investor angst. With that said, it should be understood by investors that despite the change in language from the Fed, monetary policy remains accommodative and post all-time low level rates. Take a gander at the recent study of Fed rates, the 10-yr. yield and bear markets recently undertaken by Pension Partners.

The 10-Year Treasury Yield is currently at 3.2%. After subtracting inflation of 2.3%, the real yield stands at 0.9%. Are such figures of any value in predicting equity market tops? Not exactly. 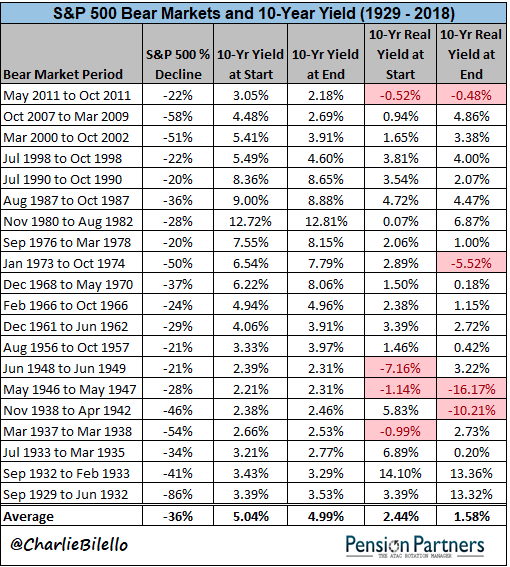 It’s important to reflect on the average 10-yr. yield with respect to the start of a bear market and where the yield is presently. Just as importantly may be the reality that the 10-yr. yield has not been able to achieve the previous expansionary highs since the 1980’s. Given where many economists and analyst forecast the next recession (late 2019-early 2020) and where the 10yr. yield currently rests, it is unlikely that the 10-yr. yield will be able to achieve even a 4.75% yield. As such, fears of rising rates may prove misplaced and more a factor of habitual fear than rational fear.

Nonetheless, equity markets may remain under pressure as earnings season rolls on. Some of the key earnings due out today are detailed in the following graphic.

Regardless of the market environment, we encourage investors to remain disciplined and perform the necessary due diligence to position properly for the long haul. While many have forecasted the current market correction, once it arrives, they become paralyzed by the actuality of the event. Finom Group offers weekly research reports, one-on-one coaching and a host of trade alerts and ideas to facilitate investor performance. Subscribe today and experience our daily and weekly trading activity as depicted in the screenshot below of yesterday’s successful trade alerts. 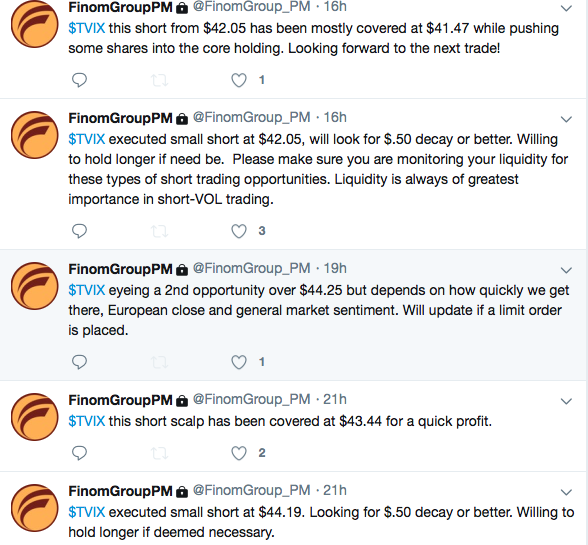