Dow 26,000 As The Breadth of the Market Continues Most Favorably

The Dow Jones industrial average e-mini futures were up nearly 1%, or 243 points, ahead of the U.S. markets opening for trading Tuesday morning. The move puts DJIA squarely in the cross hairs of achieving Dow 26,000 in a most remarkable fashion and speed.  Some of the most recent market rally can be attributed to earnings expectations in a relatively low inflationary environment while another factor is the greenback falling to a three-year low against the euro in the last trading session. Earnings season continues this week after a strong start to the season from some of the financial institutions last week that included JP Morgan Chase. This week we’ll here from the likes of Citigroup before the opening bell on Tuesday and Morgan Stanley a little later in the week just to name a few.

Last week on CNBC, Ralph Acampora said this is a market that’s more powerful than the late ’90s. We technicians look at the breadth of the market. That’s the advances and declines,” he said. “It just tells you the direction of the move. And you look at that picture, and the majority of stocks are moving up. To me, that’s broad-based advance and it makes me very, very encouraged.” 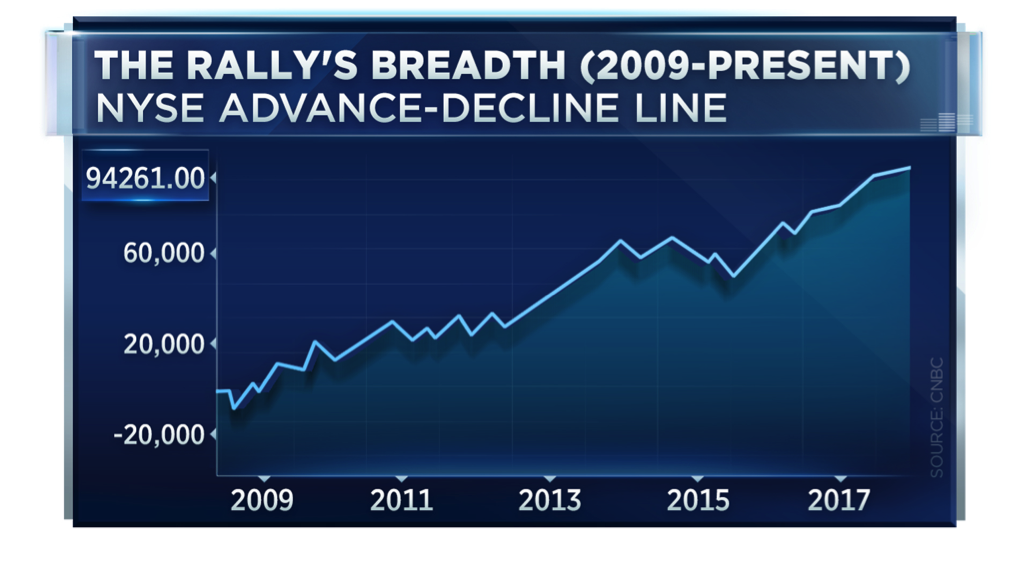 “Energy is just starting to break out. There are a lot of very good moves here that are their early stages,” Acampora said. “Financials are right behind it, industrials and, of course, technology. That game is not over yet.”

In other sector related news, Bitcoin has fallen below 12,000 on news out of China that is driving down the majority of the cryptocurrency complex. A senior Chinese central banker says authorities should ban centralized trading of virtual currencies as well as individuals and businesses that provide related services, an internal memo from a government meeting seen by Reuters showed. Bloomberg reported on Monday that Chinese authorities plan to block domestic access to Chinese and offshore cryptocurrency platforms that allow centralized trading.

The top 10 cryptocurrencies by market capitalization were all showing sizable drops on Tuesday.  The No. 2 virtual currency Ethereum was down 21%, Ripple slumped 27% and bitcoin cash shed 21%, with Neo showing the smallest fall among the top 10, losing 8 percent.

While global equities soar in the early parts of 2018, the U.S. political picture is still one that is littered with conflict. Remedying some of this conflict may come to a head this week however. This week, lawmakers aim to reach an immigration deal before Jan. 19, when Congress must pass a funding bill or the government will shut down. Some Democrats insist that the DACA question be addressed by then. Lawmakers are trying to combine some form of relief for DACA immigrants alongside a border security package that Republicans desire, including a wall along the Mexican border, sought by President Trump. The bipartisan conflict over these issues has been ongoing since the summer of 2017 whereby lawmakers have only agreed on one thing…to kick the can down the road.

Stay tuned to Finom Group’s Half-Time show ahead of the lunch hour on Wall Street!