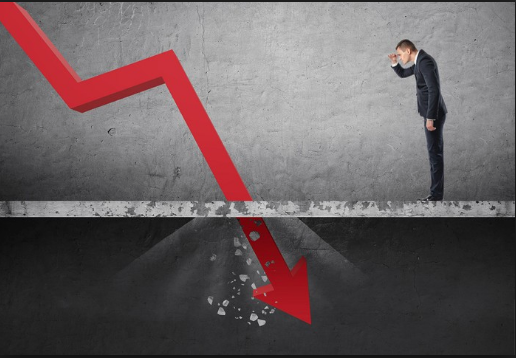 If you didn’t tune into the markets, CNBC or Bloomberg yesterday, you likely missed the Jeffrey Gundlach show. He many several comments about the equity markets, while patting himself on the back for his Facebook (FB) short. Additionally and as he always does, for better or worse, he made some innocuous calls on the market. I suggest them to be innocuous, but… well let’s take a look at the calls.

DoubleLine Capital CEO Jeffrey Gundlach said Monday that he “absolutely” believes the S&P 500 will go below the lows that the index hit early in 2018. 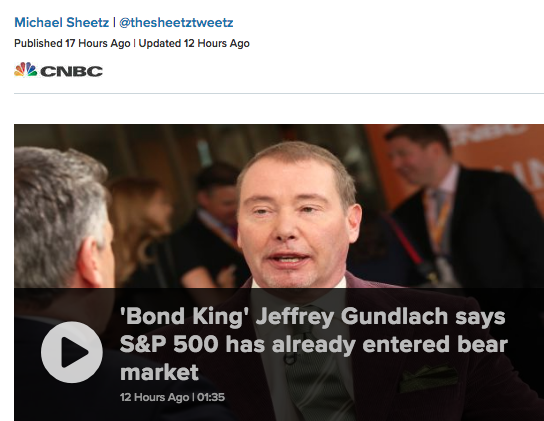 Cryptocurrency is the “mania” this time around. Bitcoin is an indicator of the market getting ahead of itself, much like during the dot-com bubble when technology companies “were being IPO’d that had no sales” or in 2006 when subprime lending “went on longer than it should have.

As a bond fund manager, Gundlach has made it his modus operandi to critique and criticize the equity markets for the vast majority of his professional career. When he stated that the S&P 500 will go below the lows from early 2018, the market was already closing in on that level, not a tough call. Most market participants have been eyeing the February lows for quite some time; Gundlach wasn’t really reaching with this “call”. And like the S&P 500 call, Gundlach’s characterization of Bitcoin is another call that has been the widely accepted view since the cryptocurrency peaked earlier in the year without any sign of stabilization in the price. As far as the call on the 10-year Treasury yield, that one likely caught the most investor interest. Before we get into that call though…

Most of Gundlach’s calls and/or recommendations tend to fail. But as a bond fund manager and investor he has the good fortunate of time on his side. Essentially rates were never lower than they have been coming out of the Great Financial Crisis. Yields had little ability to do anything but go up and alongside an economy that would eventually find expansionary conditions. Nonetheless, when the Fed finally embarked on its rate hike mission, Gundlach didn’t believe that inflation would be able to rise. Here are his comments at the beginning of the Fed rate hike cycle that launched in December 2015.

“The FOMC is saying inflation will go up to 2 percent by the beginning of 2018 just because they are saying they will raise interest rates at least 8 times. They must be seeing something no one else is seeing,” reasoned Gundlach.

It would appear that from the time Gundlach made this comment in January 2016, the Fed indeed knew what it was doing and the economy did indeed find 2% inflation even if only for 2 quarters during the year. FOMC scores 1, Gundlach scores 0. Here’s his follow-up comment on the equity markets, which at the time were experiencing a correction carried over from 2015 and into 2016.

“The markets are quite oversold, so a bounce is due.” Gundlach repeatedly spoke about “short term bottoms” in different sectors, but acknowledged that any “bounce” is likely only temporary, as we stand threatened by a bear market or full-on recession. “1985 is the only period when a 60 basis point decline in profit margins did not coincide with or predict a recession,” he lectured, adding that “Stealth bear markets are usually followed by full-on bear markets.”

Since that time/comment by Gundlach, the temporary bottom turned into something significantly greater as the major averages soared through 2017 and into 2018. Yet another failed call by Gundlach.

Of course we can go back to Gundlach’s December 2015 warnings about the equity market and post the first FOMC rate hike for the expansion cycle. His warnings were ominous when he offered the following: 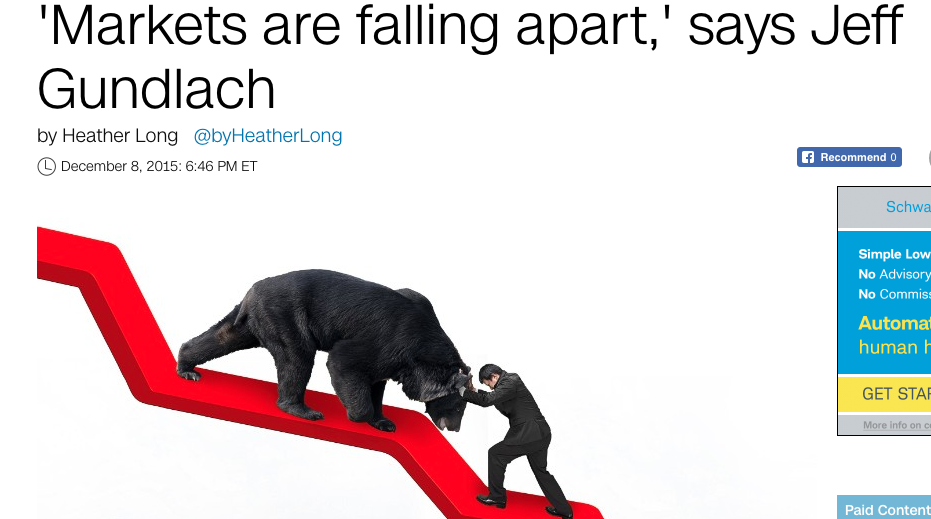 “U.S. stocks are “whistling through the graveyard! The Fed action is “unthinkable” given where many parts of the market are right now.

Gundlach predicted back in December of 2015 “the Fed will raise rates now and regret it”. The central bank of New Zealand tried to raise rates twice only to have to lower them soon after. Gundlach believed that was highly likely for the United States. Of course we are literally 3 years past this time period where the Fed has raised rates several times since, only to find equity market prices higher since and global economies remaining with expansionary conditions.

Moreover, Gundlach’s most recent market/investing call came in December 2017, forecasting out to 2018. 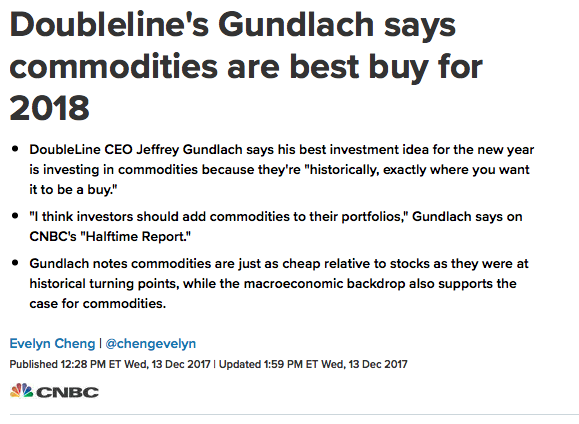 “DoubleLine CEO Jeffrey Gundlach said Wednesday on CNBC’s “Halftime Report” that his best investment idea for the new year is commodities, such as oil and gold.

You go into these massive cycles,” he said. “The repetition of this is almost eerie. And so if you look at that chart the value in commodities is, historically, exactly where you want it to be a buy.” 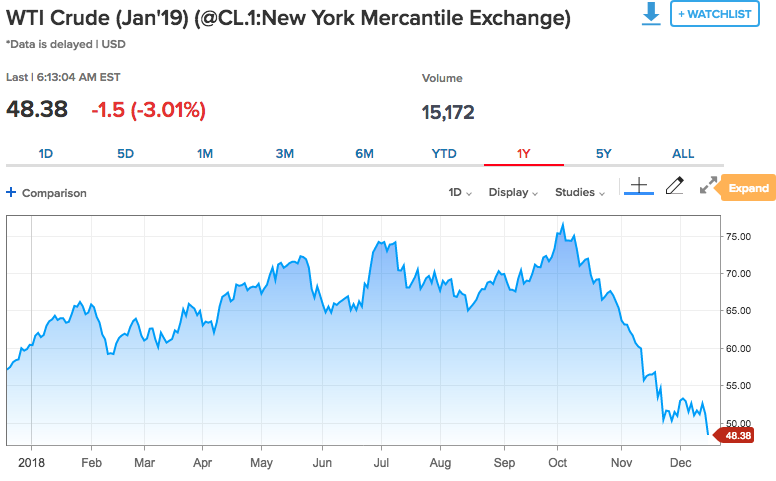 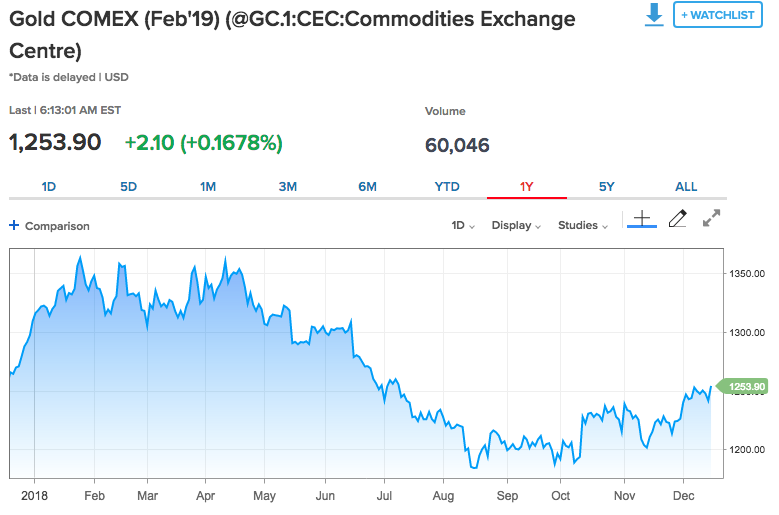 So that didn’t work out, not even a little bit! And naturally none of these, even the most recent, failed calls are mentioned in Gundlach’s latest market commentary during interviews on Bloomberg or CNBC. Why? Well he’s the Bond King!

With all the evidence put before readers, and trust me there is a great many more failed calls by Gundlach over the years, we shouldn’t be so dismissive of Gundlach’s commentary given where we are in the expansion and market cycle. Caution is the overtone being expressed by Gundlach, as is usually the expression of bond investors. They value risk management and safety over growth and multiple expansion that ultimately leads to mean reversion given enough time. And that’s what we mean by Gundlach has time on his side when he makes these comments and/or calls. Eventually a bear market will present itself and deflation will become increasingly worrisome. As long as Gundlach stays the course with his commentary, the “eventuality” of economics will prevail and Gundlach will be found accurate. You don’t have to be a genius to call for a bear market; you have to be pretty intelligent to time one. Thus far, Gundlach’s bear market calls have failed to come to fruition, which is also why he plays “fast and loose” with the definition of a bear market. But let’s get back to that 6% yield on the 10-year Treasury call by 2020-2021. 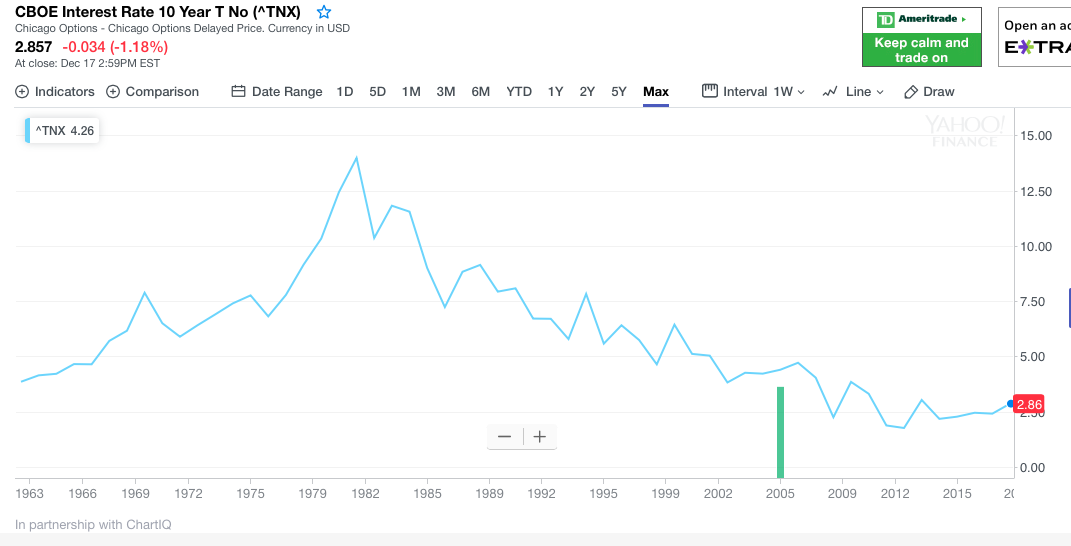 Since the 1980’s and post every recession, the 10-year Treasury yield has failed to achieve the former expansion era high yield level. It’s nothing but a slow and steady decay in yield since that time period, marred by fiscal policy error, which resulted in the anomaly in the chart above. But since that time, credit structures that underline the debt market have been erected, making it all but impossible to perform that anomalistic peak yield from the 1980’s and find cyclical reversion in yields to former expansionary highs equally unlikely. So when Gundlach forecasts a 6% 10-year yield, it is quite out of line with reality and the fundamentals of our financial structures and markets that rely on such structures and/or principles. 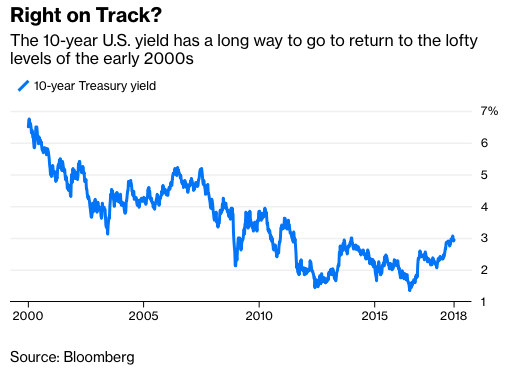 The consensus agrees with Gundlach that Treasury yields are headed higher. But the median forecast among 28 analysts surveyed by Bloomberg this month is for the U.S. 10-year yield to rise to just 3.5% by this time in 2020 from 2.95% now.

While there are a few economists with higher forecasts, none come close to that of Gundlach’s forecast. John Dunham at Guerrilla Economics in Brooklyn expects the 10-year yield to reach 4.63% in two years. Tom Fullerton, a professor at the University of Texas at El Paso, forecasts 4.6 percent.

Regardless of what Gundlach forecasts, thinks and suggests on all fronts market-related, U.S. equity markets are certainly experiencing a crisis of confidence here in the 4th quarter of 2018. Sentiment has been absolutely awful and the markets have broken down for the year, with all major averages now in the red. Personally, as the chief market strategist for Finom Group, I’m not convinced the market will fall off a cliff and enter bear market territory. Surely, many sectors are experiencing a bear market including materials, energy and financials. Nonetheless, the economic conditions are still showing signs of above trend growth that will slow in 2019, but not enough to warrant a recession. So are we simply oversold at this point? In my opinion, yes! And that’s why I plan to begin reducing certain portfolio hedges, but not all!

In a follow-up to support that the market is at least near-term oversold, take a look at the following chart. 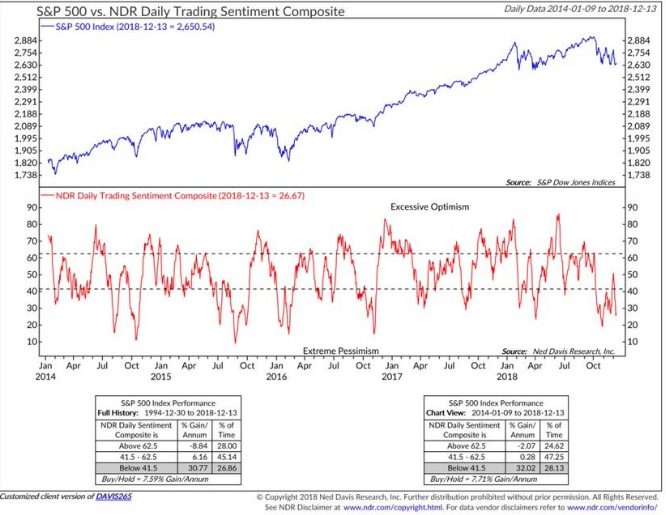 As you can see from the chart above, the NDR daily trading sentiment index is at 26.67 out of 100. When the index is below 41.5, stocks average a 30.77% gain per year since 1994. And just how scared is the individual/retail investor out there? Check out the chart below! 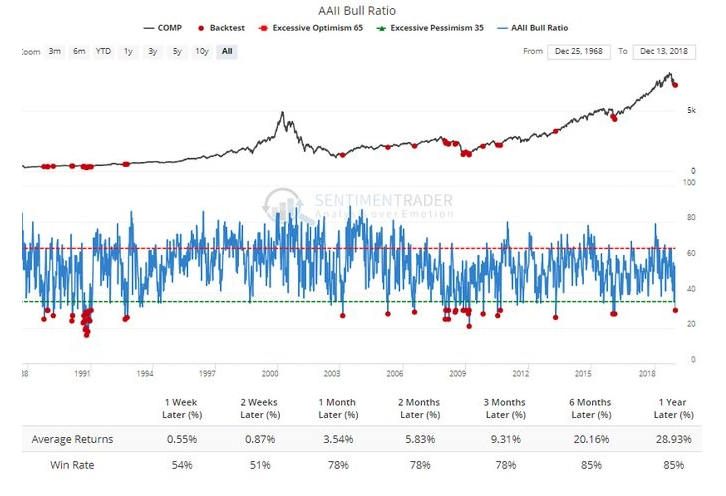 Additionally there is the equity put/call ratio that indicates oversold conditions. It was 97 percent. Consider in the entire year of 2018 we have not seen it over 90%, now it is almost 100 percent. It was 88% on February 9, the low for that correction cycle. Here is a chart of the last three times it was over 90 percent.

Undoubtedly, the market is a scary, treacherous place right now with crude oil collapsing, investors fleeing equities and going into bonds and gold finally rising from the ashes. But who’s calling for a recession other than the technicals of the stock market? We certainly have headwinds that include a trade war/spat, FOMC that is wavering and found with its share of faults recently, Brexit issues and general slowing of growth around the world. But slowing isn’t declining and there is lacking the political will for global leaders to lead their economy into a recession where deals and growth can be found.

Having said all of that, we can obviously see what is being expressed in the market declines around the world and here at home. The market is pricing in no growth in 2019, no growth in corporate earnings. 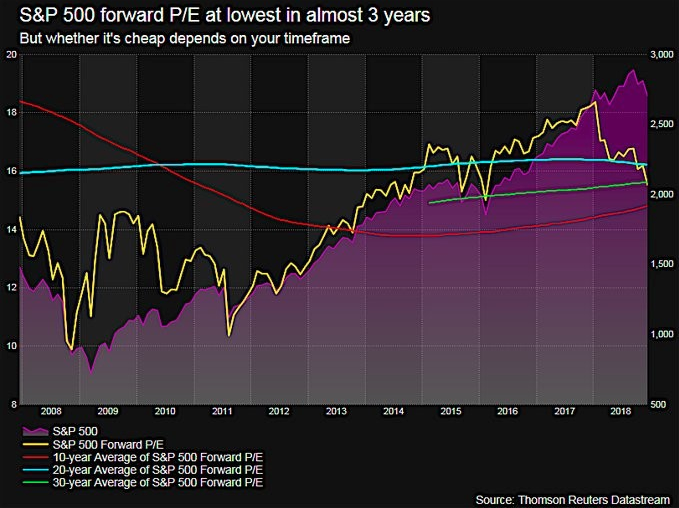 As shown in the chart above, the S&P 500’s forward PE multiple is the lowest it has been in almost 3 years or since the troubled times of late 2015. The forward PE is below the 20-year average and the 30-year average. It’s slightly above the 10-year average, mainly because 2008’s Great Financial Crisis-valuation is being included.

While it remains to be seen as to whether or not the bottom is in, from a fundamental investor’s perspective, a trading opportunity is probably being presented. The FOMC meeting being held through Wednesday with a rate hike announcement tomorrow is the consensus. What isn’t known with a great deal of certainty is to what extent the Fed will pause rate hikes into 2019 and what the Fed will suggest in terms of future balance sheet activity and what dot plot adjustments will rely upon.

Jim Cramer recently weighed in on what he believes will support equity valuations and provide a lift to the overall market and it is highly dependent on the FOMC upcoming meeting.  Cramer suggested Chairman Powell needs to clear 3 hurdles.