State of the Market Interview with Michael Listman a.k.a. UVXYTrader 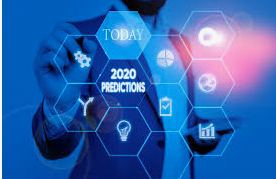 Welcome to this week’s State of the Markets with Wayne Nelson, Seth Golden and our special interview guest Michael Listman. Please click the following link to review the SOTM video/interview. This week we had the pleasure of interviewing Michael Listman, (UVXYTrader on Twitter) who specializes in trading Volatility and Volatility Exchange Traded Products (ETP). In addition to the interview, please review our weekly market notes below alongside the latest research notes and outlook on the market from Morgan Stanley’s Chetan Ahya. Breadth indicators remain with a bullish outlook for the market even as overbought conditions persist.

A year ago, the global economy seemed poised for smooth sailing. However, as 2019 progressed, trade tensions dropped an anchor on progress, dragging down corporate confidence and capital spending, and ultimately slowed progress by nearly 60 basis points.

Heading into 2020, however, the winds could shift, setting up the global economy for a third “mini-cycle recovery” in this decade-long expansion.

“While this global cycle has lasted more than a decade, constant interruptions have thus far averted an exuberant stage that would threaten overheating,” says Chetan Ahya, Morgan Stanley’s Chief Economist. Those disruptions included the European debt crisis in 2011, China’s slowdown in 2014 and, most recently, trade tensions. “Now, with trade tensions and monetary policy easing concurrently, we think the macroeconomy can continue to make forward progress.”

Looking to the Future

In Morgan Stanley’s 2020 Global Macro Outlook, Ahya and his colleagues forecast a recovery in global GDP growth from 2.9% in 4Q19 to 3.4% in 4Q20 (averaging 3.2% GDP growth in 2020). They also forecast 3.5% growth in 2021, up from an estimated 3% in 2019. This growth will come predominantly from emerging markets and, to a lesser degree, an improving outlook in Europe. The U.S. economy continues to sit on stable ground, but its pace of growth may slow down.

However, there is an asterisk with this outlook: “Should additional tariffs be enacted, we think global growth could decelerate further,” Ahya says. Moreover, with rates already low, central bankers around the world will be more limited than before to respond to any global shocks.

For this reason, Morgan Stanley strategists are prescribing more nimble and defensive positioning than in a typical recovery.

For 2020, Ahya says that the synchronous easing of trade tensions and monetary policy will be a key theme. Though U.S.-China trade will remain a factor in 2020, the current sentiment is positive.

“Throughout 2018, tighter policy and escalating trade tensions both weighed on growth, and even though monetary policy began to ease from first quarter 2019, it was offset by rising trade tensions,” Ahya says. “Today, these two forces are reinforcing each other in supporting the global economy.”

Beyond this convergence, consumption improvements could also propel a mini-recovery. “Today the consumer in aggregate is in relatively good shape, with healthy household balance sheets, low unemployment in developed markets and moderate wage growth,” Ahya says. Among other positives, the corporate sector has responded to tariff threats by trimming hours rather than laying off employees, avoiding a “spillover effect” from tariffs thus far.

Although economists forecast an average year for the U.S. consumer, a strong job market coupled with low interest rates keeps the U.S. economy on solid footing. The pace of U.S. growth is slowing, but this comes after years of above-average expansion.

“Judging from the current unemployment gap, we’d characterize the U.S. as distinctly in the late-cycle phase of recovery,” says Chief U.S. Economist Ellen Zentner. On the positive side, stabilizing growth elsewhere in the world should lift exports and business investment, which are currently at very low levels. Putting this together, Morgan Stanley’s base-case outlook calls for U.S. GDP growth of 1.8% in 2020, versus an estimated 2.3% in 2019 on a 4Q/4Q basis.

Less uncertainty around trade tensions is particularly key for emerging markets. In China, the combination of reduced tariff uncertainty and stable policy support could lead to improved corporate confidence and a steady expansion of the consumer class, adding up to a more optimistic outlook. “We expect growth to bottom in the fourth quarter of 2019 and recover modestly from there,” says Chief China Economist Robin Xing, whose team is forecasting GDP growth of 6% for China in 2020. This is also good news for Korea, which has been affected by U.S.-China trade tensions.

There are other bright spots. Notably, the Brazilian economy is poised to accelerate in 2020 as historically low interest rates spur consumption and in turn investment activity. Morgan Stanley raised its GDP growth estimate for Brazil to 2.2% for the year ahead and 3.1% for 2021.

Growth in Europe continues to be sluggish, but economists see flickers of life as less uncertainty about trade, policy and Brexit unleash pent-up demand. Although real GDP growth in the Euro area is likely to dip below 1% in 2020, economists expect it to pick up again by 2021.

The U.K. may follow a similar trajectory, assuming an orderly resolution of Brexit. Uncertainty over the U.K.’s exit from the European Union has played no small role in dampening growth. With a resolution on the horizon, the economy could soon accelerate above trend. Economists are calling for a 1.4% bump in GDP growth for 2020 followed by 2% in 2021.