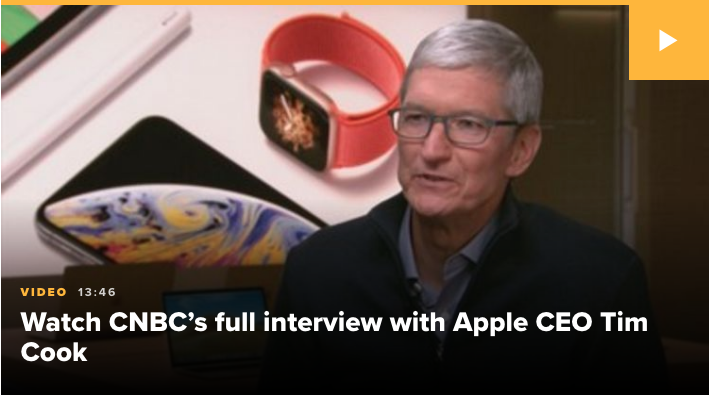 Ahead of today’s Daily Market Dispatch, we want to remind our readers and subscribers that our weekly State of the Market video will be available on-site, firstly, to Premium Subscribers Thursday evening. Now let’s get into the market overview and what to expect from today’s Fed press conference!

Although the Nasdaq (NDX) continued to suffer through Tuesday’s trading session, the Dow Jones Industrial Average (DJIA) and S&P 500 (SPX) traded in a narrow range. Most of the malaise on Wall Street was due mainly to the highly anticipated results from Apple Inc. (AAPL) that was to be released after the closing bell. We’ll get to the results in a bit, but for now let’s take a look at something a bit concerning in the way of economic data.

The consumer confidence index fell to 120.2 in this month from 126.6 in December, the privately run Conference Board said Tuesday. Economists had forecast a reading in the 124.0 rang. This was a significant miss and one largely pointing fingers at the government shutdown. 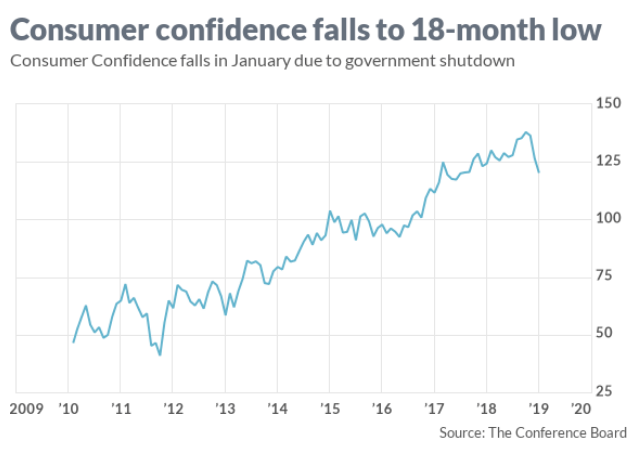 Within the survey’s index that tracks how Americans feel about the economy right now the current conditions barely fell, slipping to 169.6 from 169.9. The still-high reading indicates consumers think the economy is doing fine. But that isn’t the case when consumers look out to the future. An index that looks six months ahead tumbled to 87.3 from 97.7, a sign that Americans are somewhat more pessimistic about the near future.

“With the shutdown now over and equity prices recovering, there is a good chance that confidence will rebound in February,” said senior U.S. economist Andrew Hunter of Capital Economics.”

“Shock events such as government shutdowns tend to have sharp, but temporary, impacts on consumer confidence,” said Lynn Franco, director of economic indicators at the Conference Board. “Thus, it appears that this month’s decline is more the result of a temporary shock than a precursor to a significant slowdown in the coming months.”

What’s most concerning about the latest consumer sentiment survey is the gap between the Present Situation Index and Future Expectation Index. Historically, when the gap between the Present Situation and Future Expectations indexes has exceeded 50, it is currently at 82.3, “recessions weren’t far behind,” wrote Bespoke’s Paul Hickey.

Of course that gap between the two indexes was highlighted in a tweet from Double Line Capital’s, bond king Jeffrey Gundlach who offered the following tweet.

The government shutdown has ripple affects most obviously as demonstrated in not just the consumer sentiment survey, but also as demonstrated to some degree in the latest CNBC Fed Survey. Having said that, the Survey mainly focuses on sentiment surrounding Fed policies and how they impact economic conditions.

According to the Fed Survey, the chance of recession in the next 12 months spiked to its highest level in 3 years, as market participants ratcheted up their worries about global economic weakness, Fed rate hikes, the market sell-off, trade tensions and the government shutdown. There’s that pesky government shutdown showing up again in another survey. Sadly, the possibility of yet another shutdown looms large in Washington as President Trump presses toward border wall funding.

The CNBC Fed Survey saw the probability of a recession in the next 12 months rise to 26%, the third straight increase. The probability was last higher at nearly 29% in January 2016, following another market sell-off.

With Apple’s results delivered after the close on Tuesday, the market will mostly be awaiting and keenly tuned into the Fed’s rate hike decision that comes prior to the Fed’s press conference at 2:00 p.m. EST Wednesday. No rate hike is anticipated Wednesday.

Protectionist economic policies, global economic weakness and a Fed policy mistake are seen as the biggest threats to the expansion. Yet, respondents to the CNBC Fed Survey actually raised their forecast for 2019 growth to 2.4% from 2.3% in the prior survey and from 1.8% to 2.05% for 2020. Unemployment is seen edging higher this year.

When it comes to what the market wants and expects out of the Fed’s statement and press conference today, the key word is PATIENCE! According to most economists, Federal Reserve officials Wednesday will continue to stress that they will be “patient,” and that is largely being interpreted at this point to mean no hikes until at least June, if by then.

“A March hike is unlikely at this point, that’s how I would interpret patience,” said Andrew Hollenhorst, chief U.S. economist at Citigroup.

Vince Reinhart, chief economist and investment strategist at Mellon says, “They’re saying they are taking a pass on March.”

Probably the most market moving commentary from the Fed today will come in how it characterizes and forecasts its balance sheet run-off activities. Since the Fed’s December meeting, investors, economists and analysts have assumed the Fed can and will eventually taper its balance sheet run-off. What that exactly looks like and when is it possible for tapering to occur remains the topic of debate and as such demands details from the Fed. We wouldn’t be of the opinion that the Fed is prepared to “tip it’s hat” when it comes to guiding the markets on this subject just yet. The Fed has some time to allow the economy to speak to the Fed officials before solidifying a message and forecast regarding balance sheet run-off tapering. If we’re to assign 3 main things the Fed will likely discuss and offer on Wednesday they would likely be defined as follows:

If there is one thing investors desire mostly for today’s Fed press conference it’s really quite simple, a positive market performance through the conference, void of any missteps from Chairman Jerome Powell! It’s a rather dubious track record from the Chairman as read through the market’s performance to-date. 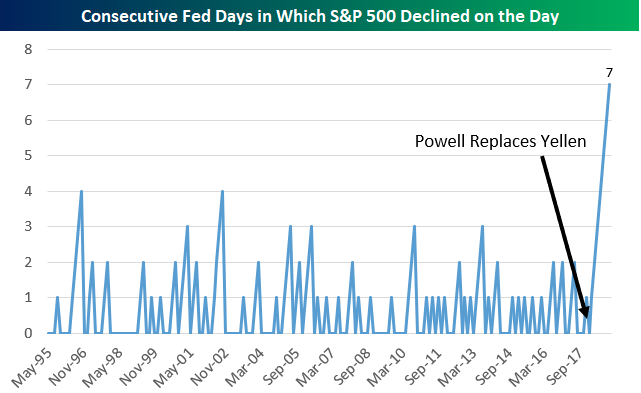 According to Bespoke Investment Group, Jerome Powell has been in charge of the Fed for seven FOMC meetings at this point, but he has yet to see the S&P 500 experience an up day on any of his Fed Days!  The current streak of 7 Fed Days without an up day is by far the longest losing streak on record. Hopefully Chairman Powell will see Wednesday’s press conference breaking this infamous streak. Maybe he’ll receive the unsolicited assistance from corporate earnings results, including Apple’s.

So let’s assume that the Fed is done hiking rates, something many economists and analysts have modeled and/or projected. According to LPL Financial’s review of like occurrences, the good news is looking at the past 6 cycles, the S&P was higher a year later 4 times and up +12% on average. 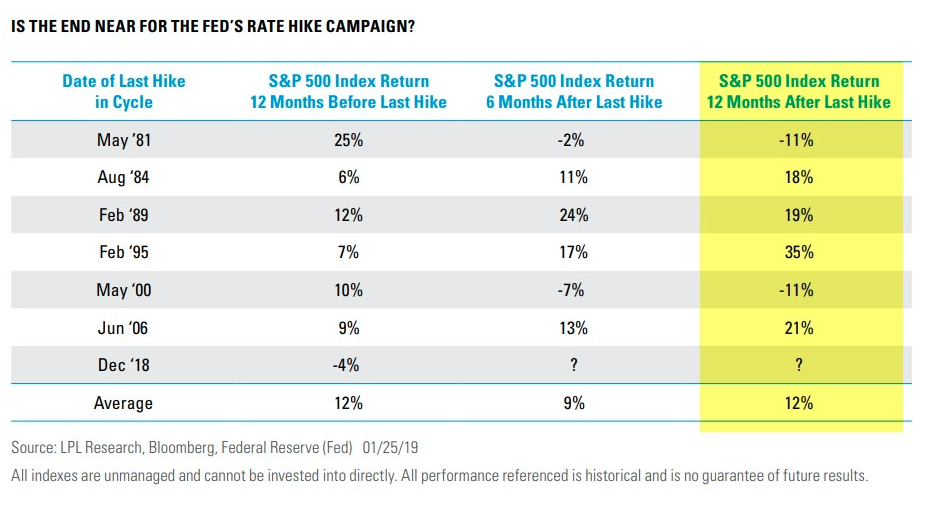 Apple reported earnings for its December quarter Tuesday that largely fell in line with expectations. But iPhone revenue came in just slightly below projections. Here’s how the company did compared with what Wall Street projected:

Apple saw a sharp decline in iPhone revenue during the quarter, denting the company’s main revenue stream. The segment saw a gross margin on its product business of 34.3 percent, lower than the 38 percent margin Apple reported for its overall business.

“Our customers are holding on to their older iPhones a bit longer than in the past. When you paired this with the macroeconomic factors particularly in emerging markets, it resulted in iPhone revenue that was down 15 percent from last year,” CEO Tim Cook said on the company’s earnings call.”

With the forecasted weakening of the hardware segment of Apple’s business, the largest segment, investors largely wanted to hear more about the iPhone maker’s services unit. Fortunately, this segment did not disappoint and even pleasantly surprised investors as they rewarded shares with a strong share price appreciation in the after hours session.

Revenue for the company’s services segment, a catch-all category that includes Apple Pay, Apple Music and iCloud storage, topped $10.9 billion, marking a 19% year-over-year increase. Apple reported a gross margin in its services segment of 62.8% versus the year ago period of 58.2 percent. Analysts at KeyBanc Capital Markets had predicted a 59 percent services gross margin for the quarter in a note distributed to clients last week. 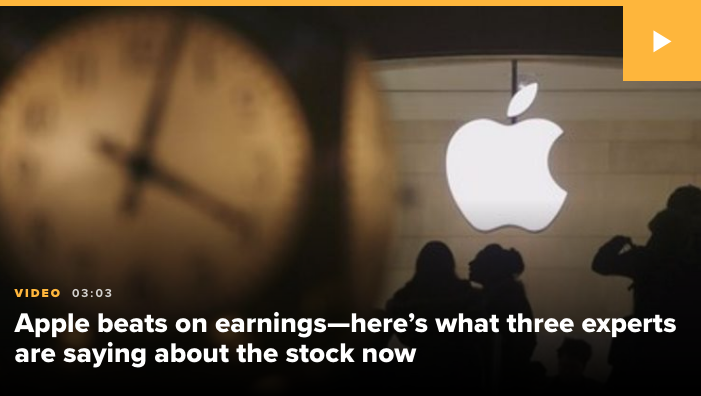 Also on the conference call with analysts, Tim Cook did say that cloud services revenue was up 40% year-over-year, that the number of Apple Pay transactions more than doubled to 1.8 billion and that Apple News now has more than 85 million monthly active users. Pretty impressive when one considers these active users are a source of recurring revenue. Even more importantly was the total active paid subscriptions across the Apple Services portfolio…

”We now have over 360 million paid subscriptions across our services portfolio, an increase of 120 million versus a year ago,” Chief Financial Officer Luca Maestri disclosed on Tuesday’s conference call. “Given the continued strength and momentum in this part of the business, we now expect the number of paid subscriptions to surpass half a billion during 2020.”

While the services business was the highlight of Apple’s latest quarterly results, the hardware side of the business is still expected to express revenue shortfalls. Wedbush analyst Daniel Ives suggested the following would be critical for the share price going forward:

”Now it comes down to that March guidance — it is imperative they hit,” Ives said, noting the big miss on the original holiday-quarter forecast that required Apple’s early warning. “There is a big credibility issue in terms of them predicting iPhone sales.”

The overall market needs to find strength in AAPL shares given its market cap weighting. It’s often been said that as AAPL goes, the market follows. This something outlined in a recent tweet from Tom McClellan

And with investors responding positively to Apple’s latest results and guidance thus far, the market now anticipates Facebook’s and Tesla’s results after the closing bell and after the Fed’s rate hike decision Wednesday.

Lastly, but certainly not least, investors will also be on alert regarding the U.S./China trade delegations that are presumed to begin in earnest Wednesday. While some commentary will likely litter the backdrop of the overall financial media the remainder of the trading week, earnings results are likely to solidify the markets overall direction.