Right now, it just doesn’t matter how good the earnings are, as the bears have their paws on the sell button and the bulls are overly concerned with prospects for the economy in 2019. With that as the backdrop for the market, corporate earnings that find companies beating analyst estimates and raising guidance have still found selling pressure. Wal-Mart (WMT) fell pressure to such an environment on Thursday when the retailer released its quarterly results. (See results below)

S&P 500 Q3 earnings are now expected to blow away forecasts, coming in around 28% growth, the highest rate of growth since 2010. 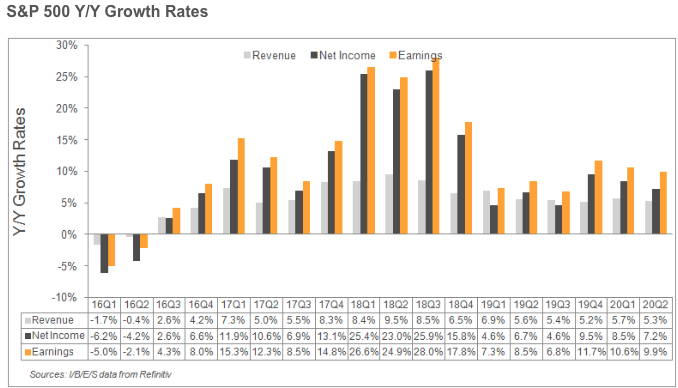 But what’s overpowering the market from going higher and pushing it lower since October is the fear of an economic slowdown that may come sooner than anyone had expected. CNBC’s Jim Cramer discussed this unforeseen condition Thursday evening.

“So many CEOs have told me about how quickly things have cooled,” the “Mad Money” host said. “So many of them are baffled that we could find ourselves in this late-cycle dilemma that wasn’t supposed to occur so soon.” 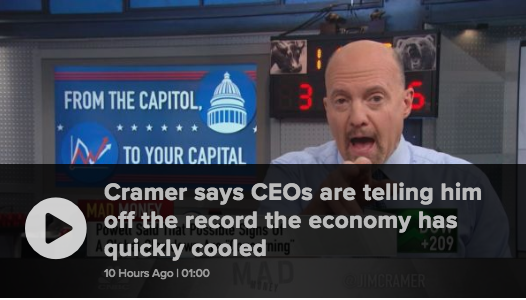 Cramer has been warning investors for weeks about a manmade slowdown in the U.S. economy, fueled by the two-pronged pressures of the Federal Reserve’s interest rate hikes and the Trump administration’s tariffs. Now, high-profile CEOs are worried about growth slowing so drastically that it could actually hurt the economy, he said.

Where once a post mid-term election rally was the anticipation of investors, it seems to have faded all too quickly and been replaced with heavy selling.   “Buying the dips” has been replaced by “selling the rips”. Aside from a potential economic slowdown that hasn’t yet found itself planted in the economic data, the Fed is weighing on investor sentiment and certain areas of the economy such as housing. But on Thursday it seemed that Fed chairman Jerome Powell is attempting to walk back his language that hints the Fed is on rate hike-auto pilot in favor of acknowledging certain aspects of the economy are slowing and could slow further. Powell has realized his job is to taper the “end-of-cycle talk” that has been filtering through the stock market and the broader economy and that many see as being tied to his rate hikes and the president’s tariffs.

Fund managers very clearly believe the best days of the market, for the current economic cycle, are in the rear view mirror. On a net basis, fund managers expect profits to deteriorate in the next 12 months, their most bearish view in 6 years. Negative profit expectations also marked equity lows in mid-2010, late-2011, mid-2012 and early 2016 (arrows). 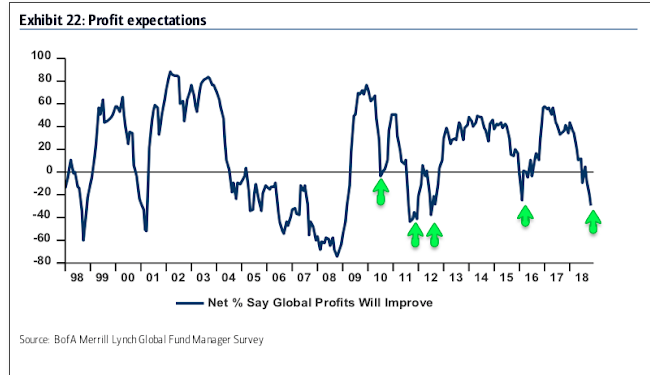 Although equities rebounded sharply on Thursday, investors will have to see if any rebound has follow through. At the lows of the day Thursday, the Dow had fallen greater than 300 points and before rising on news that China tariffs were on hold. The Financial Times reported Thursday that U.S. Trade Representative Robert Lighthizer had told some executives the next round of China tariffs are on hold, citing a person familiar with the matter. But later in the afternoon, Lighthizer’s office told CNBC, “Ambassador Lighthizer has made no representations to industry executives that future Section 301 tariffs are on hold.” The statement said the plan for tariffs outlined in September “has not changed at all. Any reports to the contrary are incorrect.” And with the contradiction to the Financial Times report, U.S. equities are pointing to a lower open on Friday.

What was also interesting about Thursday’s trading session is that it brought the S&P 500 right back toward the weekly expected move of $50 and with options set to expire on Friday. The market remains highly efficient, but it remains to be seen if the SPX can finish the week within the $50 expected move. Chinese indices finished positive once again overnight and most European indices are higher in the early morning hours as Brexit issues remain at large.

It seems unwarranted, but two dominating factors looming over the FUTURE of the economy have firmly taken hold in the marketplace. Nonetheless, we must continue to understand the current state of the economy, which is largely consumer-oriented. Thursday’s release of the October retail sales data proved to shed some light on the economy and consumer trends.

That could also result in the government trimming the initially estimated 3.5% growth in gross domestic product in the third quarter.

While the headline MoM retail sales number rose .8%, the YOY rise was also very strong. Year-over-year retail sales grew 4.6% with the biggest category of sales growth coming from gas station sales and followed only by Nonstore sales (e-commerce) that grew over 12 percent. 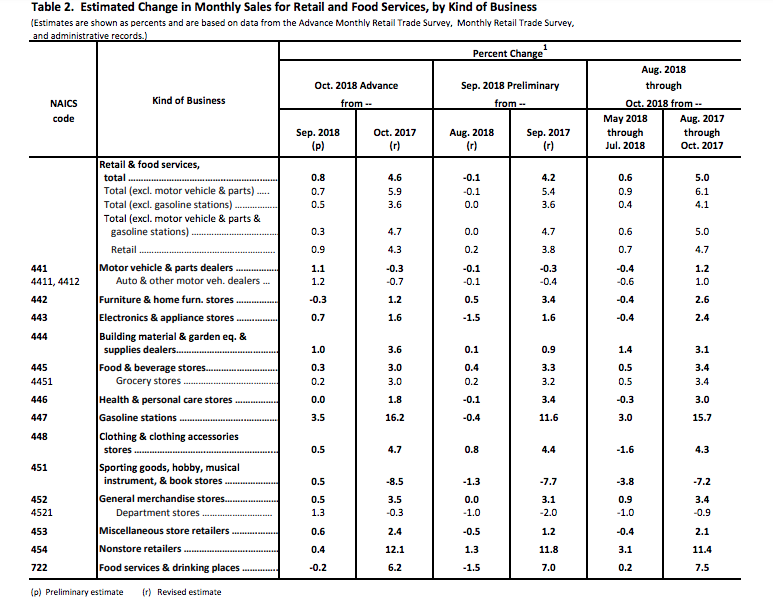 Although the current state of the economy is seemingly strong, as proven by the current economic data and overall conditions, analysts are curbing their enthusiasm for future earnings and profits. Ed Yardeni of Yardeni Research is one of the most heavily relied upon analysts for his accuracy in forecasting future earnings growth. Even Yardeni has cooled his expectations going forward. Here is what Yardeni offered in his latest blog post:

“In other words, third-quarter results didn’t curb analysts’ enthusiasm for earnings growth this year and the coming two years. I, however, curbed my enthusiasm for the earnings outlook on October 30. Here’s more on why I did so: 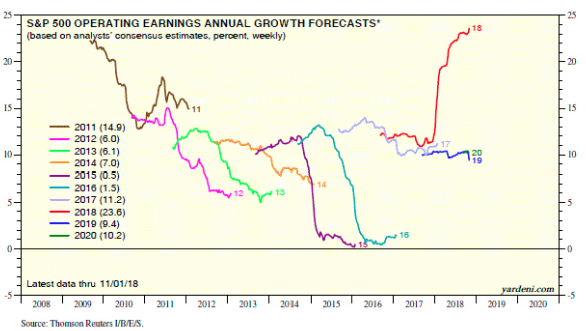 “So I don’t expect the S&P 500 profit margin to rise further from here. If it remains flat in record-high territory over the next two years, then earnings growth will match revenues growth. And if that happens, then industry analysts will be lowering their heady growth rates for earnings.”

Although Yardeni has reduced his expectations for future earnings, revenue and operating profit growth for 2019, growth is still the expectation. What investors are still struggling with is how much of the slowdown will be realized. Moreover, with earnings growth expected to slow, how much will rates rise? The conundrum amongst the investor community has obviously been highlighted by the elevated level of volatility in the market that has been ongoing since October.

The economic data calendar is light for Friday. We’ll hear from two Fed officials on Friday in a speech from Charles Evans at 11:30 a.m. and the Fed vice chairperson Richard Clarida, who will appear on CNBC’s Squawk Box at 8:00 a.m. EST. Investors will bee keenly listening for any signs that the Fed understands the concerns surrounding the potential for an economic slowdown and how they intend to tackle a slowdown by way of measured rate hikes or pausing rate hikes in favor of exercising greater data dependency.

Regardless of what the trading day brings, and with equity futures continuing to trend to the lows of the premarket, Finom Group will look for those daily, profitable trading opportunities. Below is a screenshot from our private Twitter feed, trade alert completed on Thursday.

The Fed vice chair’s discussion on CNBC may be the deciding factor for the direction of the market on Friday. Clarida will either lean more dovish or hawkish with his commentary and the markets will likely follow in his lead/lean. Have a great trading day folks!