There is plenty on the “agenda” (i.e. taxes/infrastructure, debt ceiling, geopolitical concerns, tapering, among others), so we shouldn’t be shocked to see one or more of these issues produce a market reaction, and maybe that is what the market is attempting to “price in” presently. At many different points throughout 2021 we have touched on each of the aforementioned subject matter. Our chief market strategist Seth Golden does a great job of recognizing these issues, but better puts them into investor context for practical capital management purposes. An attempt to summarize his usual commentary on these matters might go a little something like this: “Does it impact earnings, and if so how much?”

I’ll offer my thoughts on each issue, recognizing that Seth’s summarization is the #1 consideration:

In speaking to the constant drumbeat of tapering headlines, which will only elevate going into the September 22nd FOMC meeting, it’s hard to avoid such headlines and commentary on the subject matter that only holds a sample size of… 1! Maybe it’s not all that crazy to see the market finally correct a bit more ahead of any announced tapering plans by the FOMC. Remember, the week before the 2020 Presidential Election, the market corrected 6%, accounting for the potential of a contested election akin to 2000. The market is, after all, a forward discounting mechanism.

If the market desires to correct for the sake of something that doesn’t impact corporate earnings, all the better I say! Make it rain and improve the market soil for rich harvesting in the future. You’ll notice in the chart above, the tapering announcement of 2013 caused more market volatility than the actual tapering that began in 2014. As shown in the table above, after an S&P 500 seven month winning streak, the maximum drawdown average over the net 4-month period is just -2.13 percent. Sure, in 1996 the drawdown was 6.35% and there are several sub-5% drawdowns. Such data helps us to keep an open mind. In looking at the data presented, do you feel disheartened, informed and/or encouraged about the coming weeks and months. The fact that the sample sizes in the studies offered is robust, also helps to recognize that history often repeats and rhymes occasionally.

The media is making a big deal over the amount of jobs openings available being a couple million above the number of unemployed. That is what the media does. But this has largely been the trend in place since late 2017. (see chart below)

Number of job openings greater than Unemployed has been a trend that was established late 2017. This is not an anomaly! Cyclical peaks in labor market activity came with basically 70-80 job postings for every 100 unemployed workers. That was the “old normal”. The new normal is around 120 postings for every 100 unemployed. There are several reasons for the change. We would single out the growth of industries with higher levels of transient workers (e.g., leisure and hospitality) and the societal shift to intellectual capital which encourages employers to leave job postings up in the hopes of finding fresh talent. The late 2010’s labor market was the healthiest period for US employment since the late 1960s, and high levels of job postings were one positive backdrop. Yes, the August Jobs Report was disappointing, but as long as employers have the appetite to hire (and they clearly do) employment growth should rebound in the months ahead.

The PPI data implies that healthcare PCE will fall slightly in August. Recall that the PPI healthcare services is used as an input for the PCE Price Index, where healthcare also carries a larger weight than it does in CPI. Domestic non-financial corporate profits ran at a 50% annual rate for the quarter and are currently 27% above pre-pandemic levels, a 17.3% annual rate, according to Bureau of Economic Analysis. The level of profits far exceeds even pre-pandemic estimates of earnings for this year and next, an important reason why equity performance has been so strong. Corporate profit margins are the highest in decades by several metrics. But a number of factors including rising labor costs, fading fiscal and monetary stimulus, and higher corporate taxes is a risk and an eventual peak in margins has important implications for investors. There are at least 2 ways in which a correction could take place: CONDITIONS or CATALYSTS. At this point 1-year ago (blue), the BIG 5 stocks in the S&P 500 had reached max outperformance of > 60 %age points vs. the other 495 stocks in the index. That CONDITION has not been the case in 2021 (orange line). The conditions were far riper for a correction or deeper pullback in 2020 than today, given that the BIG 5 outperformance was so robust and the BIG 5 would therefore cool off as investors sought other means of generating yield. Without the same BIG 5 performance spread in 2021, it would prove less likely the S&P 500 could achieve a big pullback or correction. Therefore, a bigger pullback or correction would need a CATALYST? The question at-hand now is, “Did the Apple vs. Epic judgement deliver a catalyst that would impact the largest stocks in the market?” If the answer is yes, then indeed, the probabilities for a bigger pullback have increased.

While the monthly Op/EX trend for weekly S&P 500 returns has proven abysmal, there are some months that deliver more bullish returns than others. September happens to be one of those better return months. 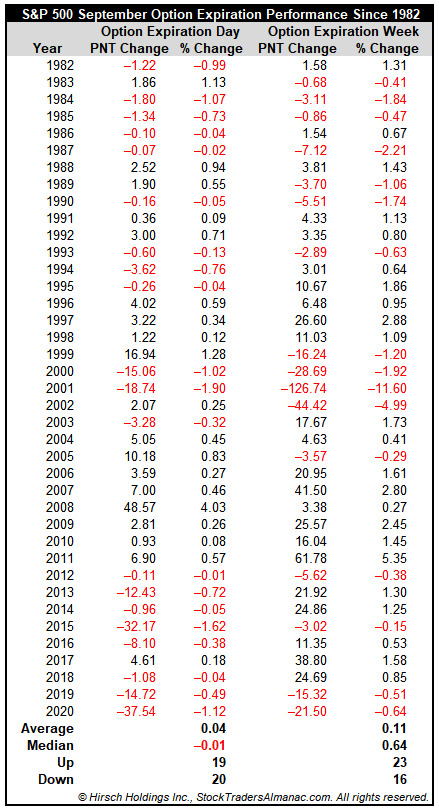 New highs are clearly not expanding/up-trending in the S&P 500 over the last 10 days either. The S&P 500 stocks at 10-Day Highs Minus Lows has actually breached the 2std deviation threshold (-188) as of Friday last week. Don’t worry about the numbers and the fancy jargon, just focus on the chart levels and red line. Since we finished slightly below this threshold that denotes washout levels on Friday, we may get a finally plunge early net week into very oversold territory. What does Ripple and ROAR mean? You’ll notice before every major deterioration in the breadth indicator, it is typically preceded by a ripple, smaller decline in the breadth indicator… and then you have the much bigger plunge for which to act upon as an investor/trader.