Non-Fungible Trainwreck. First, I’m pleased to offer readers of the Eye on the Market a holiday gift that I commissioned for you: a one-of-a-kind “APE Innovation ETF” non-fungible token. Just copy and paste the image below and your digital journey will begin. Maybe hang it in the digital living space that you bought this year. 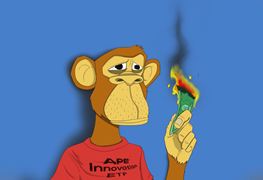 Like 2002, 2022 was also a year when unprofitable companies got repriced. The 2019-2022 cycle was arguably “dumber” since there was a historical precedent for this kind of thing. The second and third charts you will have seen before in this piece (I started writing about the YUCs in our 2020 Outlook), and are part of how we monitor the price for equity risk. Around 60%-70% of the YUC/MUC surge has now been reversed. During the stimulus bonanza, digital assets were priced at an unrealistic premium relative to physical ones. Monetary and fiscal policy are normalizing now after the longest period of negative real interest rates since 1820 and the largest fiscal deficits since 1800 (other than during WWI and WWII), so I’m not surprised to see a basket of farm equipment, office cleaning supplies and industrial REITs finally outperforming “innovation” stocks. I’m also not surprised to see oil, gas and pipeline companies outperforming renewable energy companies again this year given all the issues we discuss in our energy paper. The real world is a tough and unforgiving place, and my job is to help investors navigate that.

On energy, many investors and politicians underestimated the importance of Russia; after all how much damage could a country do if their share of world GDP was just 3%, its lowest in 200 years? This miscalculation was part of a broader underappreciation for thermal energy and ammonia/fertilizer at a time when the world was more focused on wind and solar power instead. That’s changing now; Germany just completed the first of five floating LNG regasification units, France plans for a substantial nuclear renaissance and China is importing record amounts of Russian gas and coal as part of a broader geopolitical realignment, one example of which is illustrated below. And while Russia is ruthlessly laying waste to Ukraine’s power grid, don’t be surprised if there is a ceasefire at some point, partially driven by the need for Europe to regain access to some Russian energy (oil and natural gas via land-based pipelines given damage to Nord Stream).

To wrap up 2022, I have created three rules for investors to follow…

#1: The Gensler Rule: Don’t be a complete hypocrite

Existing rules give the SEC jurisdiction over onshore and offshore crypto intermediary platforms (exchanges and broker-dealers) to prevent fraud, manipulation, front-running, wash sales and other misconduct. However, this also usually requires an SEC determination that the intermediary is trafficking in “securities”, a loaded phrase in crypto. In doing so, the SEC is acting pursuant to a decades-old Howey test definition of a security (which has been upheld by Federal Courts so far, most recently in SEC vs LBRY), and almost always over the objections of the crypto industry, politicians in both parties, influential venture capital firms and people within the SEC itself (including SEC Commissioner Peirce, known as “Crypto-Mom” based on her support for the industry).

As a result, the Gensler Rule works as follows: you may only criticize Commissioner Gensler and the rest of the SEC for the FTX failure if you meet all of the following criteria. No exceptions.

In other words, “lack of regulatory clarity” criticism of the SEC after the FTX failure is often hypocritical nonsense. Securities laws are rarely prescriptive and are instead part of a principles-based regulatory framework designed to be flexible enough to apply to new instruments as they’re created. The crypto industry litigated against retailer and exchange reporting requirements in the 2021 Infrastructure Act that are designed to prevent fraud, and both the Blockchain Association and the Association for Digital Asset Markets complained about SEC efforts to put crypto exchanges under its purview in January 2022. Just ignore them.

For two very different views of the crypto world, compare our “Maltese Falcoin” piece from February 2022 to the hilarious profile of FTX CEO Sam Bankman-Fried from Sequoia Capital’s website, which you can still find archived online. #2: The Sirens Rule: Watch out for shifting priorities in developing countries

In Greek mythology, the Sirens lured sailors to their deaths by drawing them in with song. The same thing sometimes happens in emerging markets: countries enact policies to draw in foreign capital just before either defaulting on it, or enacting policies which then destroy its value. The Sirens Rule: beware of false promises and of shifting priorities.

Larry Summers is willing to take unpopular positions when he thinks his economic views are right, even if they conflict with the economic orthodoxy of the day. The Summers Rule: when Larry talks you should listen.