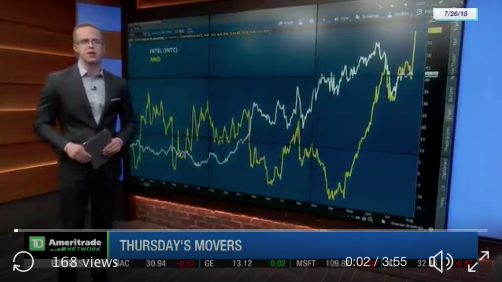 Yesterday was a record setting day in the market and for one of the market darlings… possibly a former market darling, Facebook (FB). The following graphic will go down in history and lay claim to Facebook’s infamy for some time to come. After the social media platform company narrowly missed revenue estimates for the Q2 2018 period and lowered guidance for the upcoming quarters, Facebook lost a record setting market cap value in yesterday’s trading session. 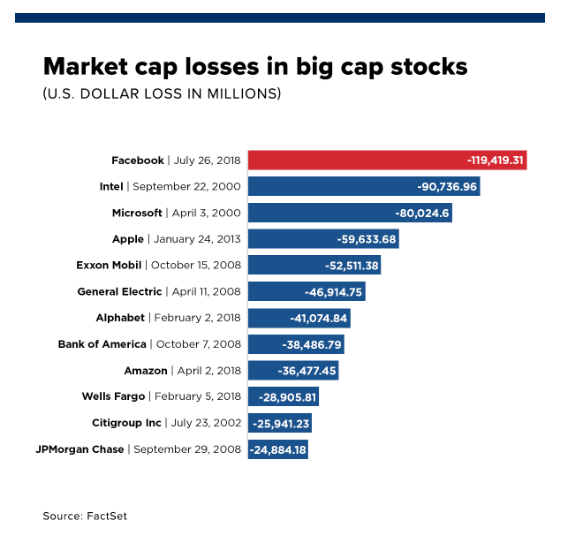 The social media giant’s market capitalization plummeted by $119 billion to $510 billion as its stock price plummeted by 19 percent. At Wednesday’s close, Facebook’s market cap had totaled nearly $630 billion, according to FactSet. No company in the history of the U.S. stock market has ever lost $100 billion in market value in just one day, but 2 came close.

With 2 out of 3 reported FANG stocks having reported Q2 results and finding their share price greatly depreciated, Amazon (AMZN) rescued the beleaguered group after the market closed. Amazon.com disclosed its biggest quarterly profit total in company history thanks to a surprising performance from the core retail business.

Amazon reported second-quarter net income of $2.5 billion, or $5.07 a share, up from earnings of 40 cents a share a year ago, marking the first time it has reported even $2 billion in quarterly profit. Amazon reported revenue of $52.9 billion, up from $37.96 billion a year ago but slightly lower than analyst estimates. Analysts on average were expecting earnings of $2.48 a share on sales of $53.37 billion. Let’s look at some of the results under the hood of the Amazon car.

The record profit report from Amazon has equity futures looking to open higher and after a day where the tech-heavy Nasdaq underperformed the broader S&P 500, due largely to Facebook’s disappointing report. The Dow Jones Industrial Average was the outperformer in yesterday’s trading session as news surrounding U.S./EU trade tensions proved to alleviate to some degree.

“President Donald Trump said he and European Commission President Jean-Claude Juncker agreed to work toward “zero tariffs” and “zero subsidies on non-auto industrial goods.” At an unscheduled news conference following a joint meeting, Trump also said the EU would buy more U.S. soybeans almost immediately and that he and Juncker would work to resolve tariffs on European steel and aluminum.”

In addition to the positive developments between the U.S. and EU on the trade front, U.S. Trade Representative Robert Lighthizer testified at a Senate Appropriations Committee hearing that a new Nafta deal could come soon.

“He pointed out that for outgoing Mexican President Enrique Peña Nieto to sign an agreement, there needs to be 90 days notice. “That takes you to around the end of August. So, if we’re going to have him sign it with the consent, of course, of the newly elected president and the president of the United States signing it and hopefully the Canadians, you’re looking at having a conclusion some time during the course of August,” Lighthizer said. “My sense is that’s not an unreasonable timeframe if everybody wants to get it done.”

Ahead of the opening trade on Wall Street Friday, all eyes will be on two key variables, Twitter’s earnings report and the Gross Domestic Product report at 8:30 a.m. Eastern Time. We’ll see if Twitter’s massive share price outperformance this year can be sustained when the company reports. In earnest, however, the broader market and investors will be keying off of the GDP report as it portends to tell us a great deal about the strength of the economy and the potential for future rate hikes from the Federal Reserve.

Friday’s Q2 2018 GDP estimates have been lowered a bit after yesterday’s Durable Goods orders report, but still find most economists and analysts expecting a significant improvement in the economy from the Q1 2018 period. This particular report is one of the more anticipated GDP reports given where investor sentiment lay with regards to the economy vs. inflation. Here’s how Guy LeBas, head of fixed-income strategy for Janney Montgomery Scott, put it via Twitter on Thursday: “I can’t remember the last time the markets placed such importance on a #GDP number as they have with tomorrow. Given the perceived optimism, a miss could catch rates violently offside (i.e., rally risk),” he wrote.

In terms of some lowered GDP expectations, Forecasting firm Macroeconomic Advisers on Thursday projected a 4.5% seasonally adjusted annual growth rate, down from its Wednesday prediction of 4.9% growth. Economists at JPMorgan Chase cut their GDP growth forecast to 3.9% from 4.4%. Barclays kept its GDP tracking estimate unchanged at 5.2%. The Federal Reserve Bank of Atlanta’s GDPNow model reduced its forecast to 3.8% from an earlier estimate of 4.5% growth.

It’s unclear how the market will react to a GDP report that is either too hot or underwhelming, given the level of interest in the report. A reading suggesting the economy is overheating could fuel expectations that the Federal Reserve may need to ratchet up its pace of rate increases, with the possibility of a further two rate increases in September and December. That could knock bond prices lower, conversely pushing rates up and pressuring equity markets lower. We’ll find out soon enough how investors will react.

Earnings results are fueling the market’s recent surge, pushing the S&P 500 ever closer to its all-time record high level set in January 2018. Investor sentiment has also improved in recent weeks according to the S&P 500 Sentiment Index as shown in the chart below. 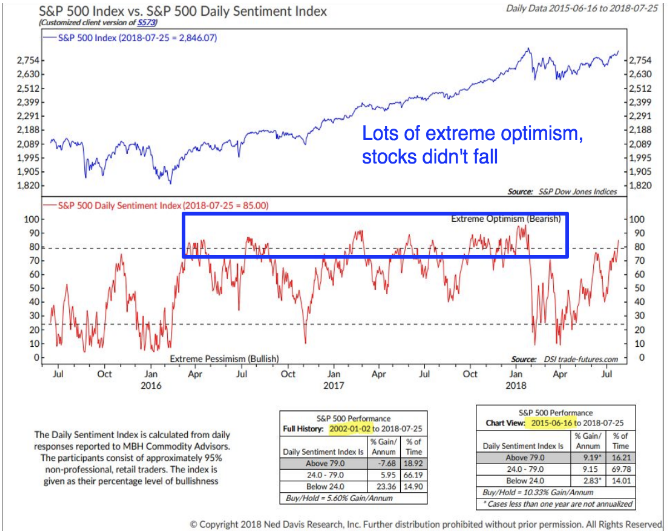 As shown above, the S&P 500’s DSI now shows “extreme optimism” for the first time since January 2018. What is also displayed in the chart above, which correlates the SPX with the SPX DSI is that optimism can last for a very long time and not necessarily be viewed as a contrarian indicator.

We have a few more trading days in the month of July and before the month of August rolls in. Unfortunately, this also marks the time for which Finom Group’s chief market strategist’s wife goes back to work. Seth Golden’s wife is a high school teacher and the end of summer is nearing, which coincides with back-to-school season. Consider this a warning as retail outlets should be heavily trafficked in the coming days and weeks as parents and children gear-up for the season. And with that warning may come some outperformance from the retail sector stocks. Certainly the Retail Sector Select Spiders ETF (XRT) has been a standout performer already in 2018. We’ll start getting into the retail sector Q2 reporting cycle next week and deeper into the sector’s reporting season in thereafter.

So with that said and with August on the horizon for investors, just what should investors expect from the month of August and from the market? When we review the last 6 decades of the market, the SPX has a 50-50 chance of going up vs. down, there really isn’t an edge for the month of August. So let’s narrow the review period down to the last 10 years. 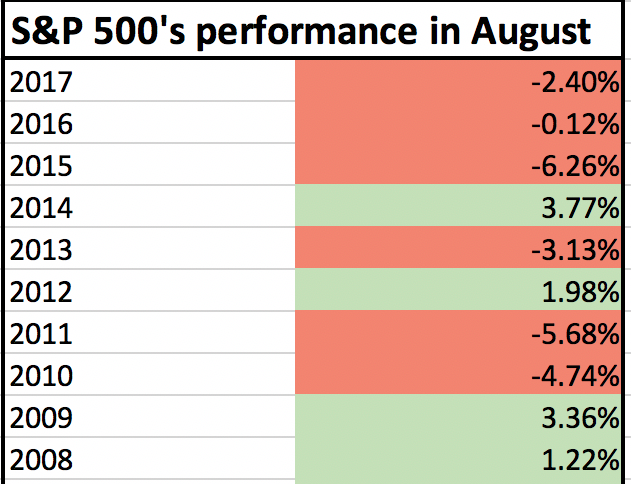 As depicted in the table above, the last 10 years have shown the greater propensity for the SPX to express declines than appreciation. We’ll see if August 2018 can buck the trend and just how strong back-to-school consumer spending will be.

One of Finom Group’s more favored Wall Street analyst is Tony Dwyer of Canaccord Genuity. Back in May, Dwyer raised his S&P 500 target from 3,100 to 3,200. 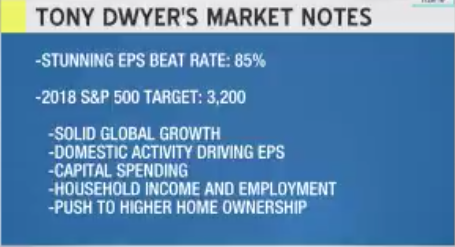 In a recent on-air interview with TD-Ameritrade Network host Oliver Renick, Dwyer was asked about his productivity trade and his takeaway from this earnings season. Finom Group encourages readers and investors to review the clip of the interview via the link.

The financial, technology and industrial sectors highlight Dwyer’s productivity trade and all 3 sectors have managed to drive the markets higher over the last several weeks. Subscribers to Finom Group were alerted to the potential opportunity in the financial sector trade on June 29th as we entered the XLF at $26.77 per share. Below was our e-mail to subscribers, informing them of the rational for the trade.

We find ourselves appreciating the potential opportunity post the Fed’s stress test results that may be found in the financial sector. In recent articles I have discussed the financials since they have been under pressure over the last several months and with the sector most recently falling for nearly 2 weeks.  It is a difficult time for the national banks, although regional banks have fared more favorably.

Investors are largely concerned that the lending environment is slowing and with the Fed tightening the yield curve is flattening, making it more difficult for banks to lend more profitably. Having said that, there is even greater concern that the Fed may continue on its path of raising rates 2 more times in 2018, which has the potential to invert the yield curve.

Some of these concerns have found the financial sector underperforming the broader market for the bulk of 2018.  We are of the opinion that much of investor concerns for the sector have largely been priced into the market.  This is not to say there is not yet more downside to be expressed in the financial sector stocks, but that downside may prove limited. As such, the risk/reward has become more favorable for investors.

Our view on the financials is that this is an opportunity to own the Financial Sector Spiders ETF (XLF) for broad diversification in the sector.  We have taken a first position in the XLF at $26.77 on June 28, 2018.  We will look to add to this position if the share price breaches $25.50.  At present, the XLF is trading below its 200-DMA which is a net negative. However, recent bank buyback announcements may prove to be a catalyst for the totality of the financial sector, providing future share price appreciation for the sector and individual financial stocks.

We will maintain shares of XLF in the Golden Capital Portfolio with a long-term view of achieving a 12-15% return on capital over the next 9-12 months.

And with that we’ll wrap up this daily market brief. There’s always a trading opportunity the market will deliver and we expect a good deal of opportunity post the GDP report today.