Ending The Week With a Whimper and Below SPX 2,600? 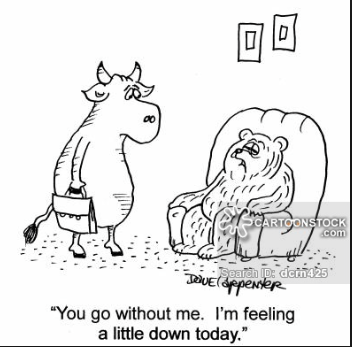 Here we are at the end of the trading week and futures are bright red, as Chinese economic data proves less than desirable. China on Friday reported industrial output and retail sales growth for the month of November that missed expectations, according to data from the National Bureau of Statistics.

Industrial output in November grew 5.4% from a year ago, the slowest pace in almost 3 years as it matched the rate of growth seen in January to February 2016, according to Reuters records. The growth in industrial production was lower than the 5.9% analysts in a Reuters poll had predicted.

In addition to weaker than expected industrial output growth, retail sales also missed the mark. Retail sales rose 8.1% in November, the weakest pace since 2003, according to Reuters’ records, lower than the 8.8% the analysts expected.

It appears as though two activities are at play with regards to China’s weakening economy. Firstly is the dedication to slowly manufacture a slowdown by the Chinese government. The government had done this in the past (2015) as an effort to devalue the yuan. The government then added stimulus to the economy to regain its momentum. In order to restimulate the economy in 2019, the PBOC will enact tax breaks.

Beijing has pledged a more proactive fiscal policy to shore up the world’s second-largest economy, where growth eased to its slowest pace since the global financial crisis as a campaign to tackle debt risks and the trade war with the United States begin to bite. Next year’s tax cuts and fee reductions are expected to reach the equivalent of, or even surpass, 1% of GDP, Ma Jun, a policy adviser to the People’s Bank of China (PBOC), told financial magazine Caixin. China’s GDP totaled 82.7 trillion yuan ($11.93 trillion) last year. A tax cut equal to 1% of GDP next year would be at least 827 billion yuan.

Regardless of what’s to come in 2019, the world economies and markets are concerned today, as global equities are in risk-off mode Friday. In addition to weakening Chinese economic data, Brexit is back in focus as Britain’s Prime Minister Theresa May fails to make a new deal with the EU.

The U.K. Parliament is legally scheduled to vote on the withdrawal agreement before January 21.

If the issues over Brexit and China’s economic slowdown weren’t enough, try throwing a U.S. government shutdown into the mix. If a continuing resolution isn’t passed through legislature by the deadline for the spending measures on Dec. 21, after a possible shutdown on Dec. 7 was avoided by a two-week funding extension, the government will shutdown. What does that mean, historically for the stock market? 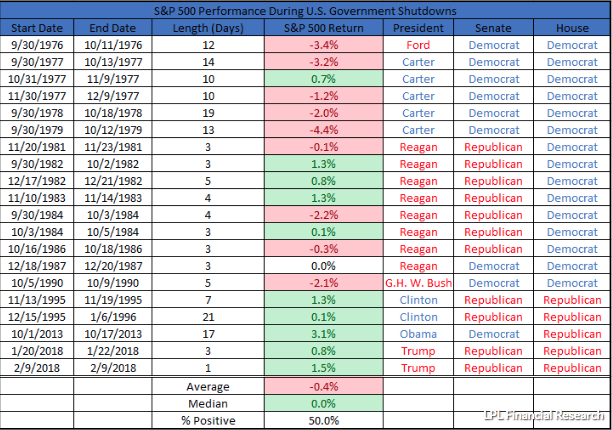 Analysis from LPL Financial Research (table above) shows that over the previous 20 government shutdowns since 1976, the median performance of the S&P 500 was exactly 0%, with stocks rising half the time and falling the other half. The average performance during those periods was a decline of 0.4 percent.

As shown in the table above from MarketWatch, November retail sales are expected to grow by .1% and by .2% ex-autos. It remains to be seen if retail sales can meet or beat expectations, as the holiday shopping season kicked into high gear on Thanksgiving Day. Most reporting from the Black Friday and Cyber Monday shopping period came in at record levels, but the decline in gasoline prices since October may prove to offset some of the strength in retail sales. It would go a long way to shoring up sentiment for the U.S. economy if retail sales can shine a bright light on the strength of the U.S. consumer, separating out the weakness felt in China’s retail sales.

The stimulus presented through tax reform has benefitted the consumer throughout 2018 and has served to grow the U.S. economy above trend. As such, threats of a recession have been pushed out to 2020. According to Avery Shenfeld, chief economist at CIBC Capital Markets, the U.S. can probably avoid a recession through 2020 if the Fed doesn’t stumble or make a policy mistake. 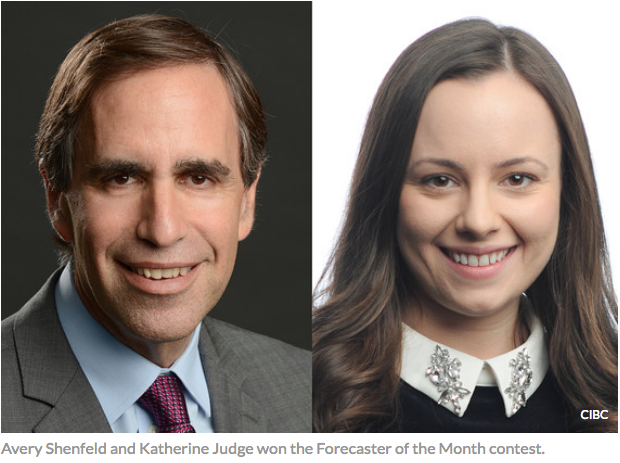 “The Fed can hike a couple more times, once next week and one or two more in 2019. There could be a recession if the Fed hiked until the economy rolled over and died,” which was a real worry after Powell said a few months ago that the fed funds rate was a long way from neutral. As long as core inflation is near 2%, “it’s hard to see the Fed making a mistake.”

Shenfeld expects the economy to slow from around 3% this year to 2.1% in 2019 and about 1.5% in 2020. The fiscal stimulus from the tax cut and spending bill was always going to fade away. On trade he expects cooler heads to prevail in the trade war with China. From his vantage point in Canada, he saw how the Trump administration settled for far less than it originally demanded.

Keeping with the potential for continued economic growth in the U.S. through 2020, corporate earnings should also continue to grow next year in a range of 4-8%, depending on which analyst you ask. Given the continued corporate earnings growth forecasted by most analysts, with risks highlighted by the trade spats, Raymond James suggests that investors are underinvested presently. 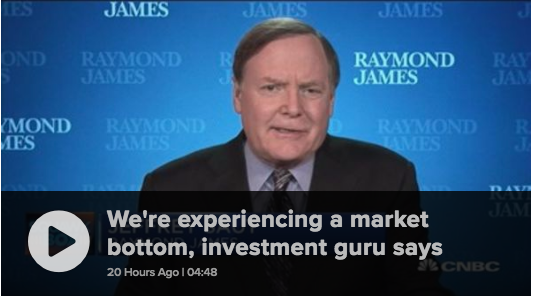 “I think it’s gonna pay off as we get into 2019 because I don’t think the economy is going to slow that much, and I continue to think earnings are going to come in better than most people expect and I think people are underinvested.”

Jeffrey Saut explained in an interview Thursday that the volatile months since his call has created a market bottom and paved the way for a Santa rally. Also, as other Wall Street analysts are looking for a slowing in rate hikes next year, Saut predicts that we’ll see two more increases. Saut isn’t the only one who believes the market will rally over the short-term, at least. David Bianco, chief investment strategist at Deutsche Asset Management, told CNBC on Wednesday that he sees a rally of between 5% and 10% in the next 30 days.

While some market experts are certainly bullish, market sentiment is decisively bearish.

If the fear and greed indicator isn’t enough to demonstrate just how skittish investors have become, weekly fund flows paint a broader picture. For the first week in five equity ETFs witnessed net outflows, handing back some $1.0 billion for the most recent flows week. Authorized participants (APs) were net sellers of domestic equity ETFs (-$3.5 billion), redeeming money from the group for the second week in three.

Bearish market sentiment matching net fund outflows continue to express a risk-off environment for equities and as bonds find buoyancy of late. The flight to “quality” has found bonds in favor during the protracted correction in global as well as domestic equities. In the U.S. the 10-year Treasury has risen heavily in price, driving the yield down from a high of 3.24% in September to roughly 2.87% presently. 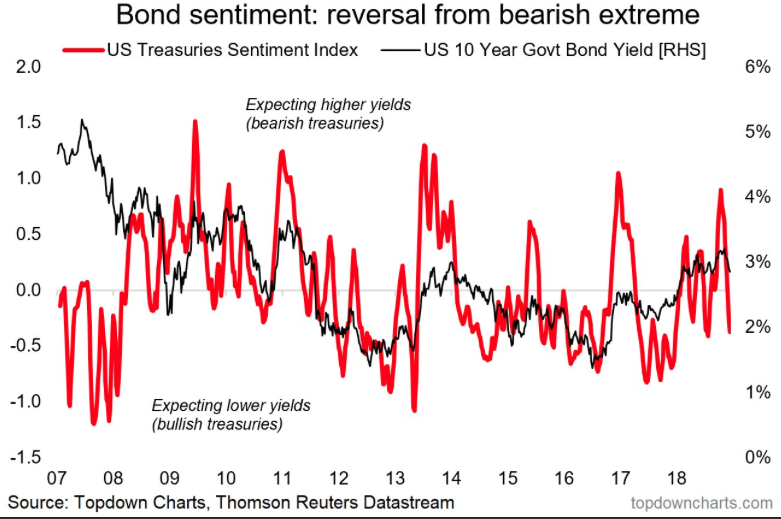 The overall bearish sentiment for equities is likely a longer-term contrarian indicator. Until that is proven, the bears continue to press their bets. Short interest in the SPDR S&P 500 ETF Trust has jumped to 5.3% of shares outstanding, according to data compiled by Markit. 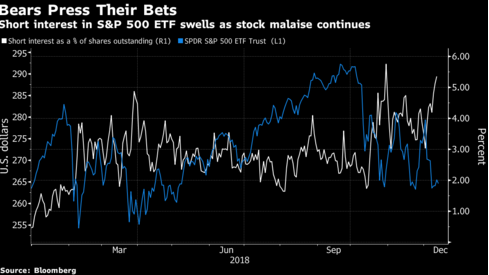 That’s the second-highest level of bearish bets against the fund in 2018. Short interest as a percentage of shares outstanding peaked at 5.8% on Oct. 30. Before that, the metric hadn’t exceeded 5% since the run-up to the 2016 U.S. presidential election… and we all know how that resolved itself.

Despite the bearish bets on Wall Street, Michael Purves, chief global strategist at Weeden & Co. offered that this uptick in short positioning with relative calm in the derivatives market, may not result in a big move in either direction in the near term.

“Tail skew continues to hover at extremely low levels, reflecting a lack of panic. These signals continue to suggest that the path forward is more likely to be a choppy sideways winter (a horizontal, or time based correction) rather than a plunge below key support (a vertical, or price based correction).” 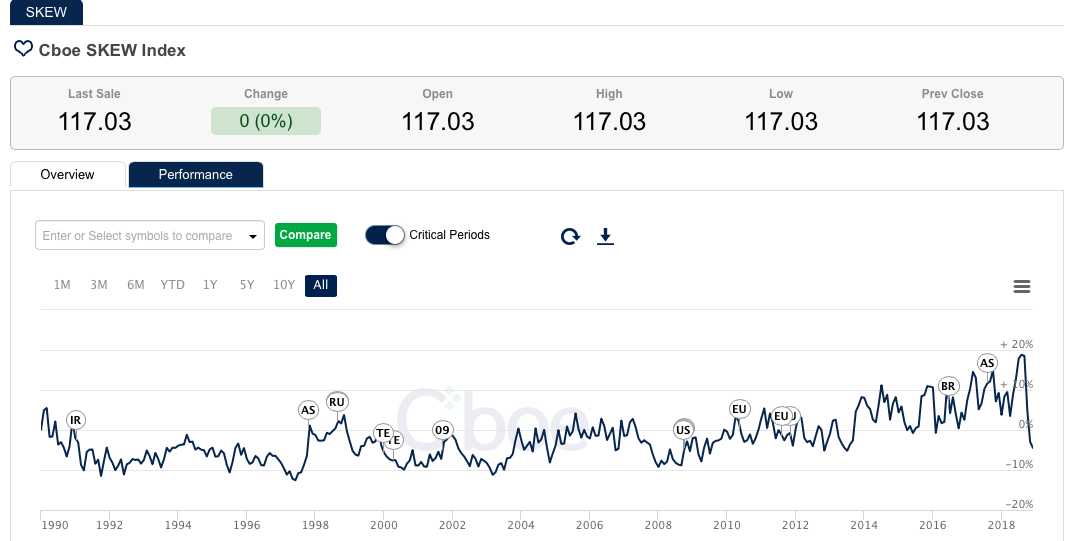 Regardless of some of the positive headlines surrounding trade, the global-macro picture continues to prove murky in the eyes of investors. As we came into the week signaling a risk-off environment, we seem to be exiting the week in the same fashion. The weekly expected move for the S&P 500 this week is $80/points and with little movement in the index week-to-date, the likelihood of a 1.5-2% move on Friday is relatively high. Starting the week at SPX 2,333 gives the index still a great deal of distance to move on Friday, as options are set to expire.