Tech Wreck Continues? PCE is Focus of the Day! 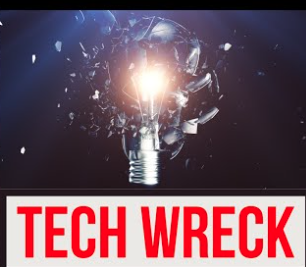 However unfortunate it may be, or maybe that depends on one’s positioning, the Nasdaq rollover from Tuesday extended to Wednesday as certain FANG stocks continued their decline. The S&P 500 and Dow Jones Industrial Average also fell yesterday to a lesser degree. While the S&P 500 index is down less than 10% from its peak in January, the average stock on the index is now 15% below its 52-week high, and the average stock in certain sectors is already in or near bear-market territory, defined as a drop of 20%, according to this chart from the Bespoke. 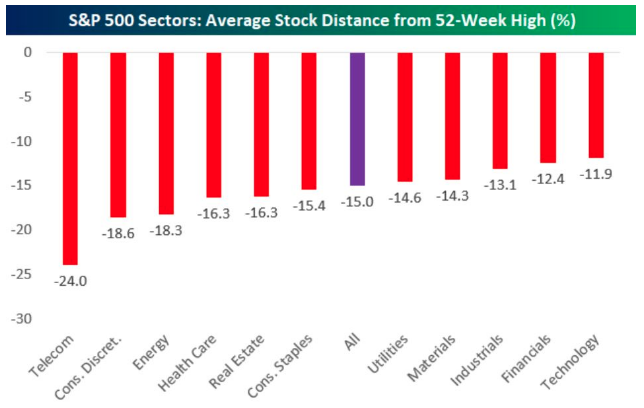 Word that President Trump dislikes and may eventually go after Amazon for its interstate tax avoidance amongst its 3rd party marketplace resellers sent the Nasdaq even lower yesterday. Shares of Amazon tumbled 4.4%, with shares falling into correction territory intraday, after a report that President Donald Trump wants to go after the e-commerce giant. The White House later said it wasn’t considering any action against the company at this time. Piling onto the headlines was also a Goldman Sachs downgrade of Apple under the guise of lesser demand in this iPhone upgrade cycle.

When it comes to what has driven the markets in recent years, the phrase that has become commonplace is, “As tech goes, the market goes”. The three biggest stocks in the S&P 500 by market capitalization are Apple, Amazon and Alphabet. They have a market cap of $2.3 trillion. The S&P 500 has a total market cap of about $23 trillion. Now, if we add Microsoft and Facebook the Big Five tech stocks make up 15% of the S&P 500. In total, Technology is 25% of the S&P 500 and as such, as it goes… Through Tuesday, the S&P 500 tech sector saw its market capitalization shrink to $5.5 trillion from its peak of around $6 trillion on March 12, according to WSJ Market Data Group.

“In the short term, it will be difficult for the broader market to ignore the selloff in tech, said Michael Arone, chief investment strategist at State Street Global Advisors.

The S&P 500 the Dow Jones Industrial Average and the tech-heavy Nasdaq Composite last week logged their biggest weekly fall since February 2016. All three are headed for monthly declines, though the Nasdaq remains slightly positive YTD while the S&P 500 and Dow are down 2.6% and 3.5%, respectively. As far as the month of March is concerned, investors are facing losses for the month. The Dow is looking at a 4.7% decline, while the S&P 500 is set for a 4% decline and the Nasdaq is on course to decline by 4.5 percent.

Facebook has been unduly named as the culprit behind the tech sector sell-off. Having said that, a host of tech stocks have had their issues of late including the likes of Tesla and Nvidia. But Facebook has and continues to take action surrounding its data gathering and the action of selling that data. Facebook unveiled new tools on Wednesday designed to make it easier for users to look at and access the data that the social media giant has on each user. The move is also an effort to regain trust with Facebook members, following the data scandal. Shares of FB finished slightly higher yesterday and appear to have held the $149 level as support.

Despite the focus or concern surrounding the tech sector and FANG stocks, Brian Belski, chief investment strategist at BMO Capital Markets doesn’t share the same degree of concern. He is looking for solid market gains this year for the indexes and technology sectors. In his note, he said tech’s absolute performance might be more relevant to overall market performance, despite the “conventional wisdom” that the tech sector needs to lead in order for the market to grind higher.

Belski found that when technology performance remains positive, which he expects for 2018, there is essentially no difference in market returns whether the sector is leading or lagging (see charts below).

While individual stocks and sectors are causing turmoil in markets lately, not that the geopolitical concerns have evaporated, the news was not all bad yesterday. The annualized pace of growth in the economy in the fourth quarter of 2017 was boosted to 2.9% from 2.5%, reflecting the biggest increase in consumer spending in three years and higher investment in business inventories. Economists polled by MarketWatch had forecast a 2.8% reading in the government’s latest revision of gross domestic product. Final Q4 GDP now indicates growth now running at 2.6% year-over-year as depicted in the chart below from Charlie Bilello of Pension Partners. 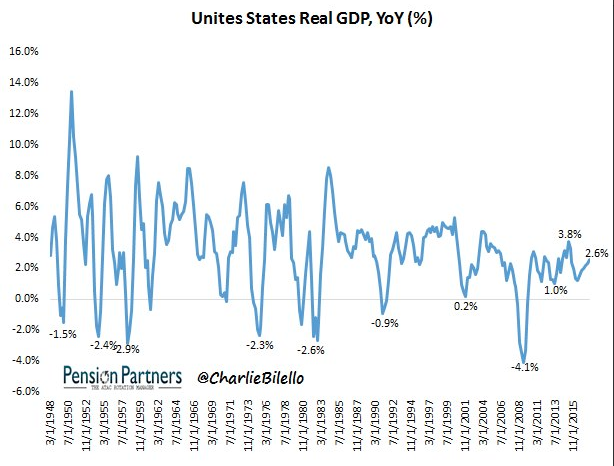 Today’s economic data comes ahead of markets being closed for Good Friday. The Personal Consumption and Expenditures data will be released at 8:30 a.m. EST. The data set, which is centered on by the FOMC with regards to their gauging of inflation, could prove highly relevant when it comes to equity :bond performance today and into the 2nd quarter of 2018.