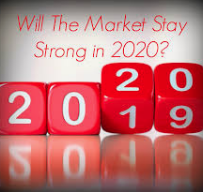 Welcome to this week’s State of the Markets with Wayne Nelson and Seth Golden. Please click the following link to review the SOTM video. In 2020, markets continue there seemingly endless melt-up. We all know that when valuations stretch too far beyond their historic average, unkind things tend to take place in the market. Currently, sentiment and market breadth register at extreme levels, but the low liquidity market and lack of selling volume has found the bull with legs. The reasons to be a seller are few and far between at the moment, shy of valuations and which hasn’t been the case through much of the bull market. We suggest the bull market will carry forward, but not higher in a straight line and not without a near-term correction. Without a recession on the horizon and with earnings projected to rebound in 2020, have that shopping list of stocks/ETFs ready.

Goldman Sachs: “Given our view of a low probability of recession…the economic and policy backdrop favors staying invested,′ said Mossavar-Rahmani. Historically, when the S&P 500 has returned 30% on a rolling 12-month basis—as it did in 2019— the next year’s returns average 10.4%, with a positive price return 85% of the time.

The probability of a positive one-year return in U.S. equities in an economic expansion is 87%.”

“It is a market that wants to go up in the short term. That is what makes it so profoundly dangerous.”